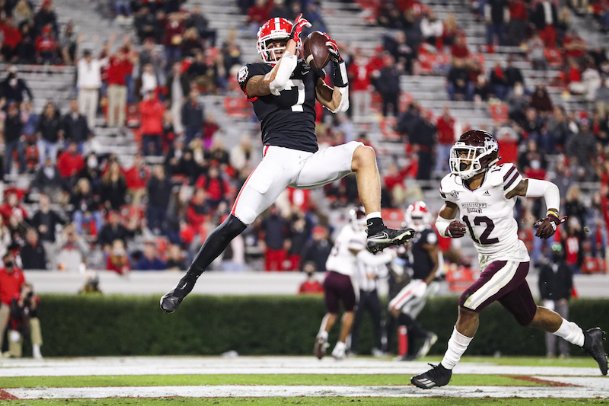 What else is there to say? As shorthanded as Mississippi State was Saturday against No. 13 Georgia on the road, the maroon Bulldogs went into Athens and had a chance to tie or take the lead with just more than a minute left. Of course, they felt short in the end, dropping a 31-24 contest.

In total, 49 scholarship players suited up for the maroon Bulldogs. We are all learning together the 53 available scholarship players the Southeastern Conference listed as protocol to play a game is more of a suggestion than it is a mandate. What's more important, apparently, is positional depth, and MSU had enough of it where the league allowed the game against Georgia to be played.

Even if they wouldn't tell you out loud, it's likely a good chunk of the fan base wondered if the game was even worth playing after the available number of players was announced. The 49 MSU players taking the field proved otherwise. Will Rogers and other young MSU players had career games, and if Mike Leach ends up succeeding in his coaching tenure in Starkville, it just might be possible this game will be remembered as the turning point.

Then again, the Egg Bowl is next week, so we all know how quickly this good will could go out the door.

As always, for those that are new to Bulldog Bullets, The Commercial Dispatch will bring you an instant reaction blog of Mississippi State football games posted immediately after the final gun filled with short observations and commentary.

-- Kudos to MSU for this effort. Even in a loss, I think most fans will be satisfied with how this game went.

-- MSU scored 17 points in the first half against Georgia. The Bulldogs scored 13 combined in their previous two games in Athens.

-- In his Georgia debut, redshirt sophomore quarterback JT Daniels threw for more than 400 yards and four touchdowns, making him the first red Bulldog player to hit at least three passing touchdowns in a single game all year.

-- Jermaine Burton gave the Maroon Bulldogs' secondary all they could handle and more. The Georgia wideout caught eight passes for 197 yards and two touchdowns. He almost had a single-game school receiving record (205 yards).

-- What a performance by Rogers. At halftime, he was 24 of 29 passing for 219 yards with completions to 10 different receivers. He finished with more than 300 yards passing and showed plenty of promise for the first time since taking over as the starter.

-- Mississippi State used more than half of the first quarter of its opening drive that resulted in points, just like everyone expected, right?

-- It's amazing what happens when MSU doesn't have third-and-a mile every possession.

-- Aaron Brule continues to fly around defensively game in and game out.

-- Smart of Georgia to utilize the hurry-up offense in the first quarter. Considering MSU was shorthanded, might as well try to get them gassed as quickly as possible, right?

-- As much maligned as the unit has been (and deservedly so) for much of this season, that has to have been by far the offensive line's best performance this year. Rogers wasn't sacked until midway through the fourth quarter.

-- What a great effort by both Rogers and JaVonta Payton to set up MSU's second scoring drive: The throw on the run from Rogers and the sliding sideline catch from Payton.

-- MSU's first two scoring drives in the first half took 8 minutes and 6 seconds and 7:04. That's how you hang around in games, folks.

-- Also how you hang around in games: limiting Georgia to six rushing yards through three quarters and converting 6 of 8 third downs in the first half.

-- Jaden Walley had himself a darn first half with six catches for 104 yards and one touchdown. The talented freshman was invisible in the second half, though.

-- What a terrible penalty by Georgia after the play was over on MSU's final drive of the game. Instead of third-and-long, the maroon Bulldogs were gifted a fresh set of downs. Georgia eventually made a stop anyway, but nevertheless!

-- It's fair to wonder what's going to happen with the Egg Bowl next week. Is Mississippi State going to get more players back? Will the Bulldogs have to play under the limit again? Will the game even be played at all?

-- It's pretty hard to imagine last year's game could possibly be topped from a pure insanity standpoint. Then again ... it is 2020.