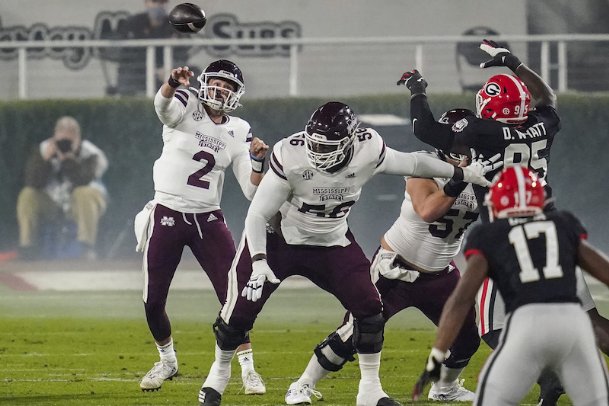 Will Rogers picked himself off the turf and exhaled a deep, painful breath.

Having been sacked on fourth-and-5 with 1:23 remaining, the freshman quarterback wallowed in Mississippi State's inspired 31-24 loss to No. 13 Georgia in Athens that exorcised demons of a month-plus worth of offensive ineptitude.

"This is by a significant margin the best game we've played this year," head coach Mike Leach said postgame.

In four outings this fall, the Brandon native had earned two of the three worst passing grades of the year between him and Stanford transfer K.J. Costello -- who was unavailable for the third straight week for an undisclosed injury -- according to Pro Football Focus.

Further muddying his early returns, Rogers' 226 yards against a Vanderbilt team that participated in their Nov. 7 meeting with just 58 scholarship players marked just the fifth time since 2013 a Leach-coached quarterback threw for less than 250 yards in a game.

But rather than the short throws and inability to get downfield that had marred appearances past, Rogers was poised and prompt in his delivery throughout the opening 30 minutes. He collected completions on nine of his first 11 passes, guiding the Bulldogs to scoring drives of 71 and 75 yards to pull MSU ahead 10-7 with 5:24 remaining in the second quarter.

Finding a streaking Jaden Walley on the right side of the formation, Rogers connected with his classmate for one of their seven hook-ups on the night four plays after a 41-yard Jack Podelsny field goal drew things even at 10-10. Darting past a gaggle of Georgia defenders and up the sideline, Walley hit pay dirt for a 51-yard score that notched the Bulldogs' longest completion since the third quarter of an Oct. 17 loss to No. 5 Texas A&M.

"At first I just recognized man coverage," Walley explained. "I waited on Austin (Williams), and I cut off him, and the ball was there. So I just caught it and just used what God gave me to get into the end zone."

Like a prize fighter rising once more following a devastating uppercut, Rogers persistently pulled MSU off the mat in Saturday's slugfest. After Georgia opened the second half with an eight-play, 78-yard drive capped off by a 48-yard passing touchdown from JT Daniels to Jermaine Burton, MSU's baby-faced gunslinger connected on seven of his next eight passes before freshman running back Dillon Johnson plunged into the end zone for his second rushing score of the night.

But as the visiting Bulldogs continued landing punches -- most notably limiting the usually dynamic Georgia rushing attack to just eight yards total -- Daniels found the knockout blow minutes into the fourth quarter. After delivering dimes to Kearis Jackson and George Pickens in the end zone that were subsequently dropped, the former USC signal caller connected with Jackson on third-and-20 for a 40-yard go-ahead score.

"There's never any moral victories, but I feel like everybody can hang their head in knowing that we fought to the end and progressed from last week or the weeks before on both sides of the ball," senior linebacker Erroll Thompson said. "But still a lot of work to do."

For weeks the Bulldogs have looked anemic to the nth degree. But in a game oddsmakers projected them to lose by more than three touchdowns, Leach's squad seemingly turned a corner.

Gone were the persistent misfires, overthrows, interceptions and downright ugliness. Instead it was replaced with crisp offensive possessions, averaging 5.3 yards per play on first down to remain on schedule, while the defense added another case study for defensive coordinator Zach Arnett's resume, which is sure to be widely sought after in the offseason.

Now sitting at 2-5 with an in-state date with Lane Kiffin and Ole Miss a week away, Saturday offered a glimpse at a revived MSU team that weeks ago looked left for dead. It wasn't a win, but it was a start.

"I feel like this is our team," Walley said when queried as to whether the Bulldogs have turned a corner. "This is the team we were supposed to be all year, and it's just now popping out. You're seeing it now."