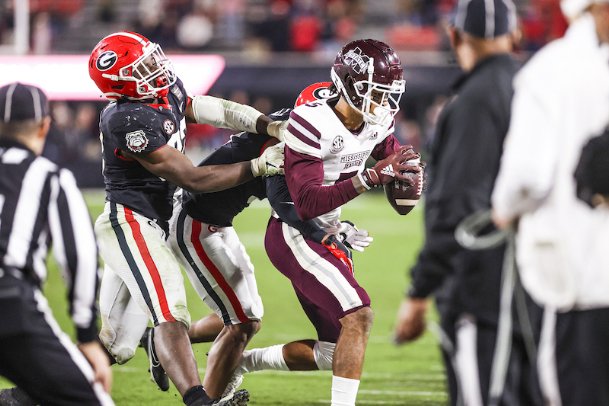 In a season where Mississippi State has already won two games, it's odd to think coach Mike Leach called Saturday's 31-24 loss to No. 13 Georgia the best game his team has played, and by a significant margin at that.

But, well, Leach is right.

"This team played as hard as any team, with what we have, that I've ever had," Leach said postgame. "... Now you don't just illustrate it, you can actually feel it. If you come away with the win it's even bigger. I've had a lot of great teams, but this team may have performed to that level higher than any team that I've ever coached."

Suiting up just 49 scholarship players due to a mix of opt-outs, positive tests and contact tracing protocols, MSU astoundingly took Georgia to the brink, having a chance to tie or take the lead on its final possession. Forget for just a second the number of available MSU players and remember how anemic the play of the offense had been for the last five games. Especially during the four-game losing streak, where MSU scored a combined 30 points, nine of them coming on defense. Then add only 49 scholarship players available on top of those woes.

Raise your hand if you saw this outcome coming before the game. Now put it down, you liar.

When it was revealed Friday just how shorthanded MSU was, playing against Georgia seemed impossible logistically if you had monitored Southeastern Conference standards all season. Well, we are all learning together the 53 available scholarship player minimum the SEC listed as protocol to play a game is more of a suggestion than it is a mandate. What's more important, apparently, is positional depth, and MSU had enough of it where the league allowed the game against Georgia to go on as scheduled.

It sure looked damn well like that game mattered to the maroon Bulldogs available, though.

MSU went blow for blow with the school that shares its nickname. The offensive line had by far its best performance of the season. True freshman quarterback Will Rogers shredded a Georgia defense that has been heralded for much of the season and finally delivered a performance that offers promise of upside for what the signal caller could develop into years down the line. The defense stymied Georgia's rushing attack, even if it was no match for its vertical passing game.

Moral victories don't typically exist in major college football, and MSU players stopped short of claiming one afterwards. But it was difficult to detect anything other than optimism following a performance that can only be described as gutsy.

Freshman wideout Jaden Walley said he felt the energy on the sideline was greater than it had been all year. And despite a 2-5 record, he believes the Bulldogs are close to where they want to be.

"I feel like this is our team," said Walley, who had a career-high 104 receiving yards. "This is the team we were supposed to be all year. And it's just now popping out. You're seeing it now."

If Leach ends up succeeding in his coaching tenure in Starkville, it just might be possible this game will be remembered as the turning point.

Then again, the Egg Bowl is next week, so we all know how quickly this good will could go out the door.

Speaking of the Egg Bowl, is MSU going to get more players back to get over the (apparently optional) threshold? Will the Bulldogs have to play under the limit again? Will the game even be played at all?

All those questions will be answered in time. But the Bulldogs already gave a definitive statement Saturday for the rest of the season: If they go down, it likely won't be with a whimper.

"You find out a lot about yourself when adversity strikes," senior linebacker Erroll Thompson said. "We fought hard tonight."