How Mississippi State learned to out-punch its weight in loss to No. 13 Georgia 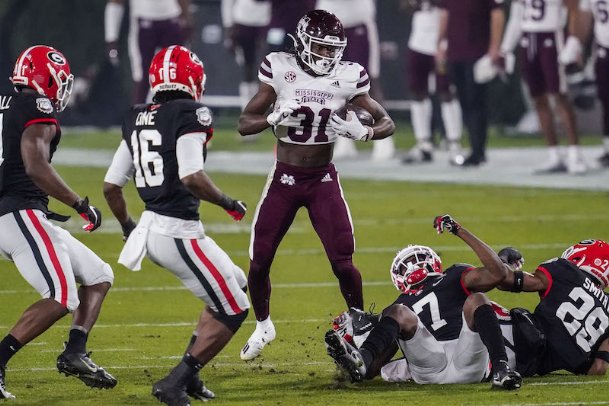 From his time at Texas Tech, to an eight-year run at Washington State and all the varying stops before, the quirky 19th-year head coach is often long on thoughts and short on a filter.

But after Saturday's 31-24 loss to No. 13 Georgia, Leach was short, to the point and, for the first time in months, pleased with the effort of a team that's looked like it's been outside the stadium, let alone in the ring in having a puncher's chance against the Southeastern Conference's elite.

"I think they've been pretty committed to improving," he said. "I think the guys that it's whittled down to now are pretty nitty-gritty guys that make you excited and proud to work with every day."

Saturday proved, if anything, Leach has found something in his squad. A spark, a trigger, whatever you feel inclined to name it. In Athens, Leach's featherweight team battled a heavyweight and, for three and a half quarters, looked as though it belonged despite playing with 49 scholarship players due to a mix of COVID-19 positive tests and contact tracing.

Amid the flurry of punches the Bulldogs threw Saturday, it was freshman Will Rogers who landed the most early and often. Following meager performances in mop-up duty against Kentucky, Alabama and Texas A&M, coupled with a middling outing against a Vanderbilt squad that was down to just 58 scholarship players at the time, the signs of progress were few, far between and, really, nonexistent.

But Saturday was different. Rogers was crisp, concise and steady in his decision-making. He completed 41 of 52 passes, including 12 straight between the second and third quarters as MSU battled to stay even with Georgia.

"He played in our (offense) in high school," air raid architect and Mike Leach mentor Hal Mumme told The Dispatch in a text message during the game. "He was always going to eventually be the guy. He's gotten his chance, and he's seeing everything. He will keep getting better."

Beyond Rogers there were other young focal points for a team that, in its infancy, seemingly moved past prepubescent mistakes and into one with youthful but deserved confidence.

Take receiver Jaden Walley. Last time the D'Iberville product was in the spotlight, he muffed a punt against Arkansas that would've given MSU possession and a chance to tie the game down one score late.

In the weeks since the muff, he's furthered the relationship he and Rogers began at the Mississippi/Alabama All-Star Game last year, grabbing lunch and hanging out off the field.

Saturday, Walley and Rogers' chemistry shone as bright as any floodlight perched above Sanford Stadium. The pair connected seven times on 10 targets. Walley's 115 yards were the most by any MSU receiver in a game since the Bulldogs upset then-No. 6 LSU on Sept. 26. His 51-yard touchdown reception also marked the longest play by any maroon and white clad player since Malik Heath went for a 32-yard score against No. 5 Texas A&M a month ago.

"I guess he gained a little trust in me then," Walley said. "And it's just working out for us right now."

Defensively, the Bulldogs continued to punch above their weight, holding a Georgia offense that has averaged at least 185 rush yards per game every season since 2015 to a mere eight yards on 23 carries -- its lowest output since mustering just 46 yards during a 37-17 loss at Auburn in November 2017.

Georgia quarterback JT Daniels had his chances, and as his recruiting profile would indicate, he connected against a shorthanded secondary for 401 yards and four touchdowns in his Georgia debut. But the Bulldogs didn't make it easy. MSU brought persistent pressure to the tune of three sacks and 11 tackles for a loss.

Sophomore linebacker Aaron Brule was a force in the pass rush and between the tackles. Stepping into the slot vacated by second-round NFL draft pick and Starkville native Willie Gay Jr., Brule proved for the umpteenth time this season he's been up to the challenge as he notched 0.5 sacks, 1.5 tackles for a loss and two pass breakups as he flew around the middle of the MSU defense.

"He's kind of an athletic guy that can get out on the edge and pass rush a little bit," senior linebacker Erroll Thompson said of Brule. "I feel like I'm more of the thumper, old school type of guy; he's more the new school type of guy."

In a career that has spanned five decades, nine schools and countless contests, Leach has long earned a reputation for garnering more out of his team than most think capable. Throughout Saturday's loss, Leach's MSU squad responded to each ensuing Georgia haymaker as they took the nation's No. 13-ranked team to the brink of defeat.

And while the Bulldogs still have work left to do in salvaging a season that looked lost and headed toward complete desertion given the recent slews of opt-outs and wayward box scores, the trip to Athens for a team that wasn't even required to play under current conference COVID-19 protocols offered a glimpse at a new gear -- one in which the Bulldogs have seemingly embraced the fighting spirit of their eccentric head coach.

"I mean 49 guys, 11 guys, 22 guys, it doesn't matter," Thompson said postgame. "We're going to scrap to the end. For the rest of the year, we've got nothing to lose. We've got to come in each week and prepare, but it's going to be a scrappy team from here on out, I can promise you that."