'It's OK to embrace this game': How SEC Network's Tom Hart is preparing for his first Egg Bowl 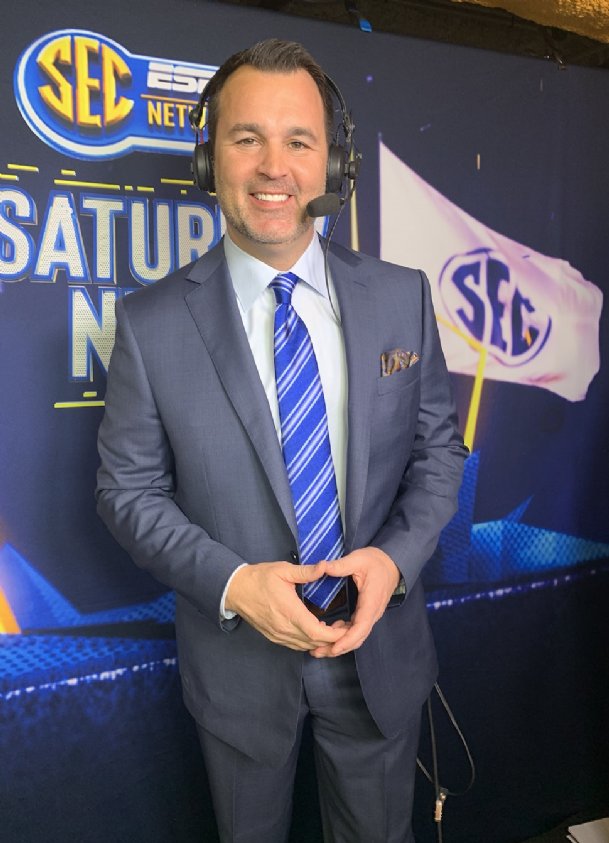 Tom Hart has been with ESPN in varying capacities since 2012. He will call his first Egg Bowl on Saturday in Oxford. Photo by: Courtesy of Tom Hart

Hart flips open his computer and begins the arduous process of filling holes on his spotting board -- a handy spreadsheet-type document that's comprised of information for his weekly broadcasts -- with the two-deep for whatever team's he's slated to cover the following Saturday. This past Sunday, that included Mississippi State and Ole Miss.

Hart, who's in his eighth year with ESPN after varying spells in minor league baseball and later in a handful of different roles with the Big Ten Network, Fox Sports Radio and Comcast Sports Southeast, among other jobs, is set to call his first Egg Bowl on Saturday as MSU (2-5) and Ole Miss (3-4) meet in Oxford.

"Whatever return to normalcy this rivalry can give the people of Mississippi and college football fans is a win in my book," Hart told The Dispatch. "... Somebody recently mentioned out loud this (the Egg Bowl) was getting toxic, and I know that that's been a storyline in the last few years... but it's OK to return to normal, and it's OK to embrace this game, which means more than maybe any other in the schedule for these respective teams."

This week, Hart joins fellow commentators Cole Cubelic and Jordan Rodgers -- the trio has only called two on-site games this fall due to the COVID-19 pandemic. For Hart, that's meant spending Saturdays in his basement, headset on and spotting board before him, calling whatever game he's tasked with from a live feed.

But for what technology has added in convenience, it lacks in-game experience. In the booth, there's nuance in how players carry themselves on the sideline that's lost in one's basement. Even in a limited capacity this year due to COVID-19 concerns, fan energy feeds into the excitement of moments throughout any contest and in how Hart and his team are able to react on the air waves.

"Even if it's not a sellout, even if it's not packed to the top row, there's still an energy in being on site that is very difficult and consuming to try and replicate when you're sitting alone in your basement," Hart said.

A native of Columbia, Missouri, and a graduate of the University of Missouri, Hart grew up in the Border War rivalry between Missouri and Kansas, a game whose roots are based in the Civil War. Saturday will offer his first look at another of college football's oldest and most hate-filled rivalries when he, Cubelic and Rodgers descend on Oxford for the 93rd annual Egg Bowl.

Hart's schedule remains relatively similar week to week. His Mondays are filled with planning and graphic requests. Production meetings are scattered throughout the week. Interviews with players and coaches usually occur on Wednesdays and Thursdays, and he visits a local restaurant of whatever town the game is in on Friday.

Consistencies aside, rivalry games offer a deeper level of preparation on the broadcast side. Hart is quick to note parents, players and coaches who've come of age on either side of the Egg Bowl boast an almost encyclopedic knowledge of its history -- a trait he concedes can't be earned in a week's worth of preparation. That said, there's moments, trends, and recent game history that all find its way onto his spotting board and various notes that scatter the broadcast booth.

Hart explains this year, for example, it's become an ongoing conversation between his team and producers on how much to discuss Elijah Moore's ill-timed peeing dog celebration from last season's game and the subsequent ripple effect it had on college football at large.

"I want to make sure, especially this week, that I have all the documented series history at my fingertips," Hart said. "And any specific trends within the series and trends for units -- offense and defense. That's just what I'm putting on paper."

Of course there's some overlap in Hart's preparation this week. As an employee of the SEC Network, he has the advantage of calling games in the same conference each week. He's also already called MSU and Ole Miss games this year. But as Hart readily admits, there's a staunch difference when MSU and Ole Miss meet on the same field, particularly when coaches as intriguing as Mike Leach and Lane Kiffin line up on either sideline.

"I'm thankful that we'll be there and we get to experience it," Hart said. "I wouldn't trade it for anything in a normal year, and I'm especially appreciative that we have that chance this year.

"The way I view it is it doesn't have to be top 10 teams battling for the Egg Bowl to matter," he continued. "But this has the potential to be the first of many great ones to come between these two coaching staffs and what they're both building locally."