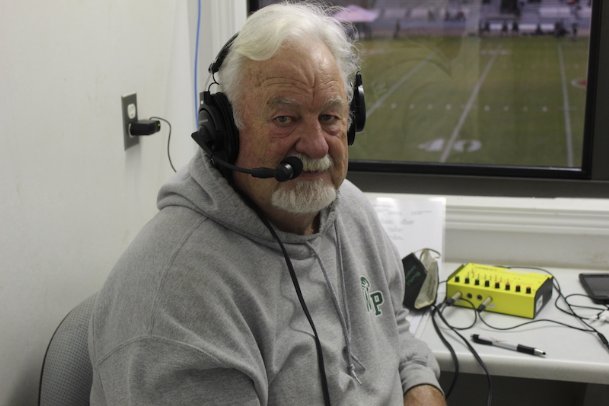 West Point play-by-play radio announcer Bud Bowen was on hand for Friday's MHSAA Class 5A quarterfinal against Grenada. Bowen has called games for the Green Wave for 43 years. Photo by: Theo DeRosa/Dispatch Staff

GRENADA -- The championship rings were on their way.

The Wayne County High School football team was 14-0, and the War Eagles were a cinch to win the 2005 MHSAA Class 4A title, after all. School administrators ordered the rings ahead of time. Why not get a head start on the celebration, right?

But instead of a Wayne County coronation, clutch play on defense carried underdog West Point to a 17-15 upset win at Mississippi Veterans Memorial Stadium in Jackson.

"That was a big, big call right there," Bowen said. "That one put tears in my eyes."

It was one of Bowen's most special moments in a 43-year career calling West Point football. Bowen, who currently calls play-by-play for West Point games for SuperTalk Mississippi, has watched the Green Wave win all 11 of their state titles and hopes for a 12th next week.

And over the course of his long career, Bowen has become a fixture of West Point and a well-known name around the state of Mississippi.

"I think he's one of those local treasures," Mississippi State Athletic Director John Cohen, a longtime listener, said. "The whole world might not know about him, but he's really good at what he does."

'The best seat in the house'

In 1977, Bowen and West Point radio personality Jack King did impressions of sports commentators over drinks at a local establishment. King liked what he heard, but neither man thought much about it at the time.

And though the frequency has changed -- 15 or 20 years in, the station switched to 100.9 FM, which brought a larger listener base and made Bowen's name known -- the man wearing the headset hasn't.

Bowen was there for West Point's first title in 1982, when the Green Wave capped off an undefeated season with a Class AA title in 1982.

There for the "tumble" West Point took in the 1990s before Dennis Allen returned to build the program back up to a title in 2002.

For the six championships -- and, Bowen hopes, a seventh -- under coach Chris Chambless, who took over for Allen in June 2006.

"I've had the best seat in the house," Bowen said. "I've been blessed to be with a great school and a great program -- a winning program -- and I wouldn't swap this gig for any other gig I know."

To that seat, Bowen brings a mix of jovial commentary and thoughtful analysis. He develops nicknames for every player -- running back Aeris Williams earned the moniker "A-Train," which stuck when Williams went on to star at Mississippi State; another player was dubbed "the Whammer."

"When you're listening to a game, you want information, but you want to be entertained at the same time," Cohen said.

Bowen has even popularized a catchphrase that doubles as his own sobriquet: the "Woohoo Mercy" man. The two words adorn the black mask he wore to last week's second-round playoff game at Grenada.

Around 30 years ago, Bowen borrowed the phrase from Mississippi Sports Hall of Fame broadcaster Bill Goodrich, who coined it calling Jackson Senators baseball. Unfamiliar with the expression, a new generation took it and ran with it, Bowen said.

And upon hearing his father's words on the airwaves again, Goodrich's son called Bowen and gave him permission to utter them.

"He said his dad would be so proud for me to use that expression," Bowen said.

Since he moved from Aberdeen at age 11 in 1959, West Point has been Bowen's home.

He graduated from the same high school he still represents in 1965, attended Mississippi State and even served in the U.S. Air Force for four years. Before retiring, he ran the city's parks and recreation department for decades.

And though he's taken a few years off -- watching his daughter, a cheerleader, during her senior year in 1997; caring for his dying mother in 2011 -- Bowen hasn't quite had a year as strange as 2020.

Normally, he's around the coaches and players a lot, learning about them so he can incorporate that information into his broadcasts. This season, though, Bowen is keeping his distance to protect his health because of the COVID-19 pandemic.

Chambless said the fact that Bowen is still calling games -- home and away -- despite the virus is a reminder of what Bowen provides to the community.

The Green Wave coach met Bowen in 1999 when Chambless started as an assistant in Allen's first year. Initially, Bowen made cassette tapes of his broadcasts; Chambless donned headphones, powered up his Walkman and listened to them while cutting the grass.

Since then, the two have been good friends and occasional neighbors. Bowen's daughter has even babysat Chambless' kids.

"He keeps me grounded," Chambless said of Bowen. "I can't say enough about him. He's just a historical tradition here at West Point."

Cohen, hired as head baseball coach at Mississippi State in the summer of 2008, was soon introduced to that tradition. Before or after dinners with recruits on Friday nights in the fall, he'd turn on the radio and listen to Bowen on SuperTalk.

It wasn't just Cohen, either. When he and his assistants convened at a restaurant or back in the office, they'd debrief the game that each had listened to.

Cohen, who got to meet Bowen a few teams during speaking engagements in West Point, referred to the Green Wave commentator as a "high school version" of Jack Cristil, who called Mississippi State football and men's basketball games on the radio for 58 years.

"It's somebody who has their own style, who's been doing it a long time and has become an institution in our state," Cohen said.

As long as his health is good, Bowen said, he has no plans to stop anytime soon. Whenever the Green Wave are playing, he'll be there to enjoy it in person and keep those who can't informed and entertained.