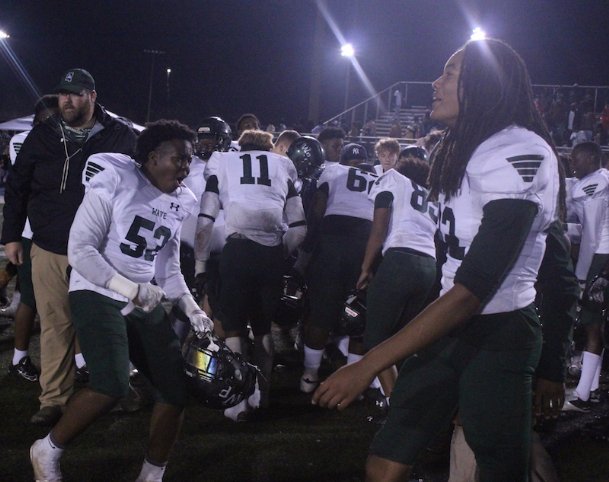 RIDGELAND -- After the clock hit zeros, after the final pass was knocked away, West Point running back Cameron Young ran over to celebrate with the Green Wave defense as it ran off the field in joy.

Young knew where the credit lay.

Sure, with three rushing touchdowns in Friday's 29-22 win over Ridgeland in the MHSAA Class 5A north state final, Young had a claim to plenty of the kudos.

Instead, he went over to a defense that limited a powerful Titans offense to just eight points after the first quarter and basked in the moment with them. After a third straight road playoff win, the Green Wave were going back to the state title game.

Consider this the fifth consecutive good season, then. West Point has won the last four Class 5A championships and has designs on five in a row, which would tie South Panola for the most consecutive titles among public schools in the state. The Green Wave are currently tied with the Tigers for most MHSAA championships with 11 apiece.

They hope No. 12 is on the way at 7 p.m. next Saturday against West Jones at Mississippi Veterans Memorial Stadium in Jackson. In 2018, the Mustangs ran into a powerhouse Green Wave team that beat them 27-12 on the championship stage to finish 14-1.

"They're going to want revenge," West Point coach Chris Chambless said. "We know we're going to get everything they've got. At this time of the year, it's the last game. You're either going to win or don't win -- we don't like that 'L' word."

The way the Green Wave have been playing the past few weeks, that much is clear. Even when

West Point allowed touchdowns on Ridgeland's first two drives and was stopped at the Titans' 6-yard line on its own second possession, giving the home team the ball back with a 14-7 lead, it showed the "refuse to lose" attitude Chambless has praised the past few weeks.

Helped by a holding penalty on the Titans, the Green Wave got their first -- and perhaps their biggest -- stop of the night, stuffing a Ridgeland run on fourth down near midfield. Four minutes later, Young was in the end zone to tie the game at 14-14.

But once again, West Point would have to fight back. The Green Wave were stopped on their first possession of the second half, and Ridgeland cashed in for a touchdown and a two-point conversion.

After both teams went for it on fourth down and failed, West Point answered. Senior JaKobe Pate had a big gain on the ground to set himself up for a 6-yard touchdown run, and he then found quarterback Corbin Kelley on a throwback play for the tying two-point try.

"He's a big part of our team, and we pull for each other," said Young, who was glad to see Pate get up and run off the field after being injured midway through the fourth quarter. Chambless said the senior was knocked out cold briefly and that the team would have him checked out.

The injury came near the beginning of a back-breaking drive put together by West Point to bury the Titans. When the Green Wave took possession at their own 20 with 7 minutes, 45 seconds to go, their intent was twofold.

"We wanted to be a little methodical about it, but we also wanted to score," Chambless said.

West Point kept its normal rhythm, using its traditional ground attack to move the ball down the field. That involved a variety of backs: Pate had a couple decent runs before his injury, Young picked up a key third down with a spin move, and Chris Ivy took a direct snap to move the chains in a critical situation.

But it was Kelley, who went more horizontal than vertical on a fourth-and-2 rush play that failed by a yard earlier on, who atoned for his mistake in a big way. On the same bootleg run, he gave West Point first-and-goal at the 4 with 51 seconds left. Young powered in on the next play with 45 seconds to go.

"We tried to milk the clock as much as we could because we know their offense is so dangerous," Young said of the Titans.

With its last gasp, Ridgeland nearly proved him right. McDonald had two clutch throws to get the ball down the field in the final seconds, and the Titans ran one final play from the West Point 38 with two ticks to go. But McDonald's pass was knocked away near the goal line by Frederick McMillian. West Point had survived.

"We just had to step up," Chambless said. "Hats off to them. They're a tremendous football team."

But so, of course, is West Point. The Green Wave proved that again Friday, and they'll have one more chance to do so next week in Jackson.

For Young, with the streak on the line, that means everything.

Noxubee County will face Magee in the state championship game at 11 a.m. Friday in Jackson.