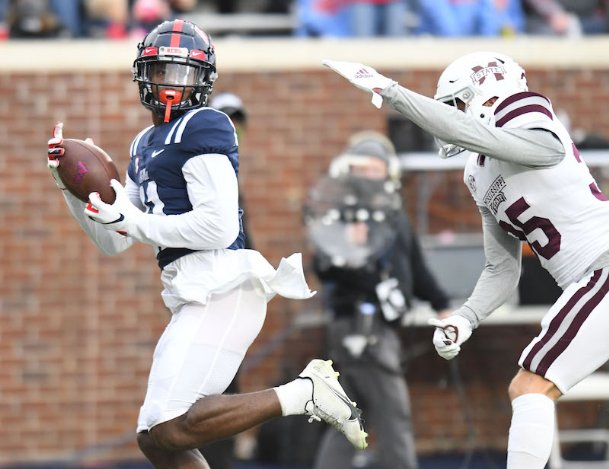 Taking into account the game was billed up for months because of the coaches affiliated with both programs, the 2020 Egg Bowl was a bit of a snoozefest all things considered.

But one thing was unmistakable: Ole Miss was the better team Saturday. Matt Corral was too much for a depleted MSU defense to hold off for too long, Lane Kiffin was hellbent on going for it on every fourth-down attempt imaginable, and the Bulldogs couldn't put together enough offense against the Southeastern Conference's worst defense statistically.

Following the 31-24 defeat, you'll probably hear the narrative resurfaced that Mike Leach can't win rivalry games factoring in his 1-7 record in the Apple Cup at Washington State. Whether that's a fair assessment or not is debatable, but it's going to be a storyline.

As always, for those that are new to Bulldog Bullets, The Commercial Dispatch will bring you an instant reaction blog of Mississippi State football games posted immediately after the final gun filled with short observations and commentary.

-- Well, it was certainly an interesting first season under Leach... wait, there's two more games left to play? This feels weird, man. But he's guaranteed to finish his first year with a losing record.

-- Not sure if it's pure aggression, distrust in the kicker, or a combination of the two, but Kiffin gambling on every fourth down deep in MSU territory regardless of score and previous success is a coaching strategy not often seen.

-- Going 3 of 14 on third down against that Ole Miss defense isn't a great look.

-- Poor MSU safety Landon Guidry could use a hug after getting beat for multiple long touchdowns.

-- Gotta give Corral credit. That dude can flat out sling it. Ditto to Elijah Moore, who has established himself as one of the best receivers in the nation.

-- Braylon Sanders did MSU a huge favor by dropping a sure touchdown on fourth down on Ole Miss' first drive.

-- Kameron Jones, an offensive lineman, got a reception! He's living the dream.

-- Austin Williams, probably the most sure-handed receiver MSU has, fumbled at the 1-yard line when the Bulldogs were on the verge of tying the game early. Deane Leonard, a former running back now playing defensive back, recovered and ran 84 yards, creating an eventual 14-point swing. I guess 2020 giveth, 2020 taketh away.

-- Jaden Walley, back-to-back 100-plus yard first halves. Broke Mardye McDole's 48-year record (148) for most receiving yards in a game by a freshman after catching nine passes for 176 yards. Not bad for the freshman wideout.

-- All things considering, it seemed like Will Rogers played another very respectable game.

-- Outstanding two-minute drive by MSU before halftime. A 13 play, 94 yard series was finished off by Malik Heath's second receiving touchdown of the half.

-- Kiffin going for it on fourth-and-3 from his own 38 (and converting) up one touchdown mid third quarter is all sorts of gutsy.

-- How Walley managed to haul in a pass after taking a massive hit late in the fourth, I'll never know. The guy certainly looks like a player.

-- Interesting onside kick strategy putting two kickers out on the field. The attempt itself was otherwise uneventful.

-- Because the Egg Bowl is the Egg Bowl, at least two press box scribes predicted Rogers' last-ditch Hail Mary to be caught while the ball was in the air. Nevertheless, it wasn't.