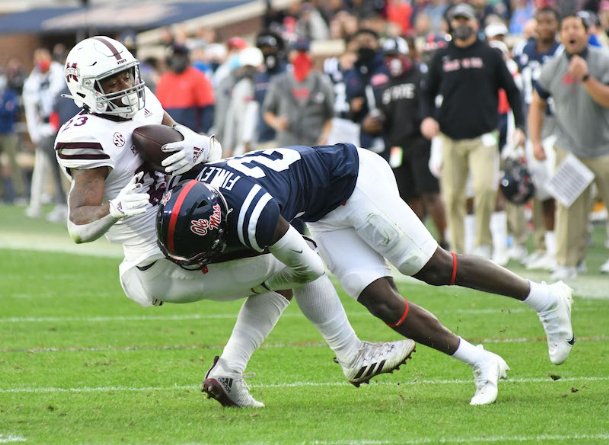 OXFORD -- Will Rogers scratched his head and peered deep into the Oxford night.

As Ole Miss players stormed past the Brandon native after his last-second heave fell to the ground in the back right corner of the end zone, Rogers could only look on in confusion and disbelief after he broke an MSU Egg Bowl passing record, notched over 400 yards through the air and brought the Bulldogs to the precipice of victory down Highway 278.

"We're playing with only 45 scholarship guys, so that makes it challenging, too," head coach Mike Leach said postgame. "But I thought our guys kept playing hard the whole time, the whole duration, because you know there weren't a lot of reinforcements up there."

In a rivalry marred by more than a century's worth of absurdity, Saturday's meeting of in-state companions remained rather tame as Ole Miss earned its first victory in Oxford since 2014 with a 31-24 win.

Matching the high-flying offenses of first-year head coaches Lane Kiffin and Mike Leach, Ole Miss and MSU combined for 1,029 yards of offense, while the Bulldogs' 440 yards through the air marked the program's most ever in an Egg Bowl.

Racing a mile a minute throughout Saturday's first half, Ole Miss finished the opening 30 minutes with 42 plays from scrimmage in just 12:39 of possession time, and 82 overall -- its most in a victory this season. But for as efficient as the Rebels' offense was, Kiffin's attack stalled deep in MSU territory. Rather than attempt a field goal until the fourth quarter, Ole Miss was thrice stopped on fourth downs inside the MSU 21-yard line.

"There was definitely a point at which I was wondering to what extent they hated their kicker or punter," Leach quipped postgame. "... Hopefully next time around those guys can win the popularity contest down there, but it looks like they're down right now."

After offering signs of life following two months' worth of anemic displays, the MSU offense sputtered to life in spurts Saturday. Freshman Will Rogers completed 45 of 61 passes in his first meeting against the Rebels. Junior receiver Malik Heath, a former Under Armour All-American who joined MSU after two years at Copiah-Lincoln Community College, notched his best game to date with two touchdown catches on four total receptions.

After a breakout performance a week ago against No. 9 Georgia, receiver Jaden Walley broke Mardye McDole's 43-year-old freshman record with 176 yards receiving. Darting down the MSU sideline early in the fourth quarter, it was Walley's one-handed snag as he was smoked by Ole Miss defensive back Jaylon Jordan that gave MSU a glimmer of hope at a third straight Egg Bowl crown.

"I can't even explain what happened," Walley said postgame. "I just looked up, and the ball was in the air, and I threw my hand up and tried to catch it."

Following Walley's highlight-reel grab, junior receiver Austin Williams redeemed a goal-line fumble from the first quarter that was later deposited by Rebels running back Snoop Conner for a 1-yard score with a touchdown of his own as he hauled two Ole Miss defenders with him to pay dirt to bring MSU within three points.

"Obviously I made a mistake," Williams said. "I tried to bounce back, do whatever I could to help the team."

Facing an Ole Miss offense that ranked third nationally in yards per game entering the contest, the shorthanded MSU defense bent for much of the night but finally broke as sophomore running back Jerrion Ealy carried a gaggle of defenders across the goal line with 4:48 remaining in the fourth quarter to give the Rebels their first win over their in-state rivals since 2017.

Minutes after connecting for a reception that's sure to appear on ESPN's SportsCenter on Saturday night, Rogers' final pass of the night was deflected out of Walley's hands as a chorus of Hotty Toddys enveloped Vaught-Hemingway Stadium.

"There's no moral victories, but I do think we are playing hard, playing tough," Williams said. "There's no quit in this team for sure."