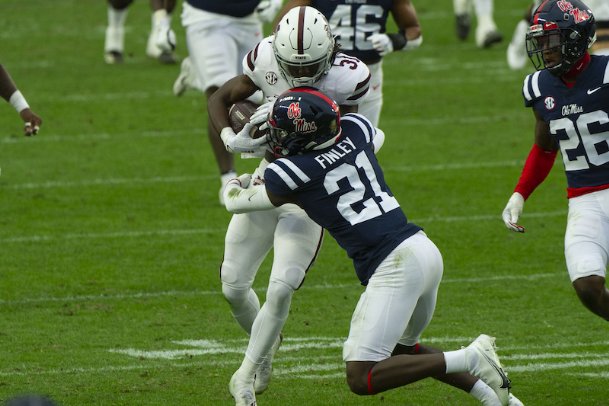 OXFORD -- Jaden Walley doesn't believe he's ever been on ESPN's SportsCenter. Hell, he said he doesn't even watch it.

But after Walley's highlight-reel, one-handed grab down the right sideline in Mississippi State's 31-24 Egg Bowl loss to Ole Miss, he assured his appearance on the nightly program's Top 10 plays is merely a matter of time.

"I can't even explain what happened," Walley said of his acrobatic sideline catch through an ear-to-ear grin. "I just looked up, and the ball was in the air, and I threw my hand up and tried to catch it."

A converted quarterback out of D'Iberville High School, the first-year phenom has had his moments. Over the first six games of 2020, Walley went over the 50-yard plateau just once. He was even held without a catch in the season-opening upset of No. 6 LSU.

Walley's low point came in a Week 2 loss to Arkansas as MSU crashed roughly 10,000 feet from its post-LSU pedestal. Offered a chance on punt return, he muffed a kick that would've given the Bulldogs possession and a chance to tie the game late. Instead, the Razorbacks walked out of Davis Wade Stadium with an unseemly victory.

But in the weeks since, Walley has rather loudly announced his arrival to the Starkville and Southeastern Conference scene. In last week's trip to Athens, he torched a Georgia defense that has been ranked among the nation's best of the past half-decade for 115 yards and a 51-yard touchdown that left the Bulldogs valiantly close to springing an upset.

Facing an Ole Miss secondary that's allowed an average of 40 points per game heading into the 93rd Battle for the Golden Egg, Walley danced up, down and around the Rebels defense with rhythm and timing that would've made Magnolia State blues musicians past and present jealous of his crescendo over the course of this season.

Catching nine balls on 14 targets, he broke Mardye McDole's 43-year-old freshman single-game receiving record with 176 yards on nine receptions. McDole, as you may recall, became a second-round pick of the Minnesota Vikings following his time at MSU and still holds the school record for single-season receiving yards.

Not coincidentally, Walley's massive outputs have coincided with newly inspired offensive efforts for head coach Mike Leach's squads. After exploding for 623 passing yards against LSU, losses to Georgia and Ole Miss over the past two weeks marked the second- and third-best passing performances of Leach's tenure.

Walley's classmate Will Rogers has also shown a poise and maturity in the pocket behind a recently-improved offensive line that's aided in the recent uptick. Saturday, Rogers passed for an Egg Bowl record 440 yards and became the first freshman in school history with multiple 300-yard passing outings in a season.

"The success they have isn't really a surprise for anyone in our building because we know how hard they worked to get here and they both have bright futures," senior linebacker Erroll Thompson said of Walley's and Rogers' performances of late. "I mean you see Walley today and some of the balls Will Rogers throws, it's not freshman like. Pretty great future ahead."

"I think Jaden is playing extremely well for a true freshman," Leach added.

Yet for a player as young and talented as he is, there's a quiet confidence to Walley. He's subdued in postgame press conferences, with slight tinges of youthful exuberance here and there. As he answers questions from reporters, he lights up slightly, but recoils as to not offer too much excitement as his dreadlocks peek out from beneath an MSU-branded ski cap.

For Walley, games like Saturday in Oxford are new at the collegiate level. But having performed as he has on Mississippi's grandest stage in a rivalry consumed by bitterness, hate and historic moments, the freshman pass catcher has given the Bulldogs a major weapon not only down the road, but in the immediate future as well.

And as for SportsCenter? That, too, is imminent.

"I don't think about it too much," Walley said of his recent ascent. "I just go out and play the next play, play as hard as I can, and whatever happens happens."