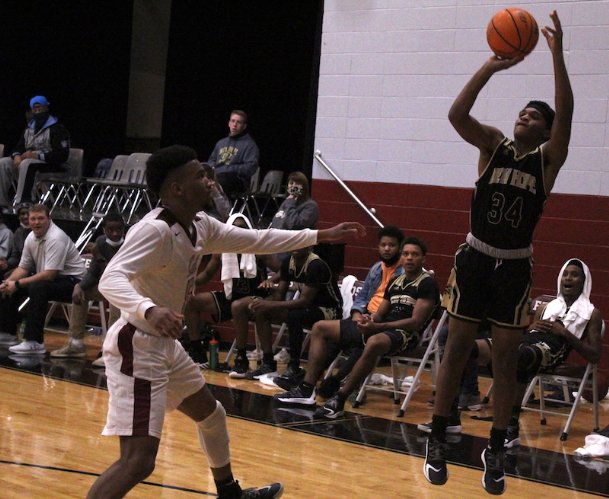 CALEDONIA -- Presented with an opportunity, Caleb Parr drove down the middle of the lane and tried a dunk, only to watch as the basketball bounced hard off the back of the rim.

But the New Hope junior didn't have to rue the moment long.

His rebound bounced into the hands of teammate Eric Caldwell, who leapt to corral it near the free-throw line. Caldwell's jumper from there glanced lightly off the rim and dropped through the net.

"Anytime you get those hustle plays, as a coach, you like stuff like that," New Hope coach Drew McBrayer said.

The second-quarter possession in Tuesday's road game at rival Caledonia wasn't particularly impactful -- it simply extended New Hope's lead to 26 points -- but it was an excellent summation of the contest: The Trojans (2-0) gave plenty of effort in a dominant 78-52 win over the Cavaliers (2-3).

"We just feel like we came out hard and came out pushing ourselves, making good passes and everything," sophomore guard LJ Hackman said.

New Hope blazed its way to a 48-25 halftime lead before cooling a bit in the second half, scoring 30 points in the third and fourth quarters. Five 3-pointers helped pace the Trojans to the early advantage, as did defensive stops leading to scores in transition.

"I thought we played with great energy in the first half -- really got after them defensively, and (that) led to some easy baskets for us," McBrayer said.

The Cavaliers, returning just one starter -- point guard Jarvis Leigh -- couldn't stop it, though they matched the Trojans in the third quarter as each team scored 20 points in the period.

Leigh and Jeremy Emerson tied for the team lead with 16 points apiece.

"We made a few strides tonight," Seals said. "We had a little trouble keeping them in front of us. But I've seen them play -- everybody else does, too."

The Trojans took advantage of a balanced scoring effort to win Tuesday. Hackman led New Hope with 16 points, while Jorden Edwards had 15. Parr added 12, Ty Crowell had 10, and Caldwell had nine.

"It's good knowing that if one of us has a bad night, we have other players on the floor who can go score," Parr said.

So far, New Hope -- even after losing nine seniors, including RL Mattix and Jaylen Smith -- hasn't run into problems in its first two games. But with three contests on the schedule in each of the next two weeks, the Trojans will soon see what they're made of.

"We're going to find out real quick now what it's like to play in a bunch of ballgames," McBrayer said.

When the New Hope girls began to fight back in Tuesday's game at Caledonia, Cavaliers senior Allison Pennington knew what her team had to do.

"We just had to get in their face more," Pennington said.

That meant closing out on the Trojans' 3-point shooters and cutting off drives before they reached the basket to keep New Hope at bay. Caledonia held on for a 53-46 win to improve to 3-2 on the season.

"They have worked so hard, and they are starting to see it play out," Cavaliers coach Ame Walker said.

Walker, previously an assistant with the New Hope middle school girls team, took over for Gary Griffin at Caledonia this season. So far, she's seeing results, but Tuesday was different: It came against players she knew well.

"It's difficult to come in and coach against kids that you coached in junior high," Walker said. "It's never fun to see anybody lose that you'd invested in their life, but that's the way it falls sometimes."

That's certainly how it fell Friday as Caledonia earned a rare win over New Hope.

"It felt good, because I don't think we've beat them in the past," Pennington said. "We've worked hard to get where we are."

New Hope fell to 1-1 on the season with the loss. The Trojans are still getting used to things in the opening stages of their season, coach Nick Christy said.

"It is still early -- it's only our second game -- but I definitely expected us to come out and execute at a higher level," Christy said. "That goes on me. That goes on them."

After getting out to an early 6-0 lead, New Hope's offense ran cold for nearly a quarter while Caledonia essentially scored at will. The Cavs built up a 28-17 halftime lead, and it was enough.

"They played hard, and they made shots when they needed to," Christy said. "We didn't. We had plenty of open looks with nobody near us and couldn't get them to go."

Pennington, who finished with 20 points, took advantage of New Hope's deficiencies rebounding and defending. So did senior Libby McMurphey, who had 11 points on three made 3-pointers. One of the triples came on a key second-quarter possession after the Cavs collected multiple offensive rebounds to keep the ball alive.

"She is our hot hand, usually," said Walker, who noted that Caledonia made an adjustment in Tuesday's practice to get McMurphey more open looks. "Libby is that kid who's going to always be in the right place at the right time."

Lucy Sharp had 12 points for the Patriots in the loss.

Kate Wilkins had 16 points for the Pirates. Lily Lowery and Audrey Fondren each had eight, and Baylee Jaynes and Elyse Dean had six apiece.

Mack Howard led the Patriots with 13 points, and Trey Naugher had 11.

Dash Turman had 18 points for the Eagles in the win.

Hebron's next game is Thursday against Calhoun Academy at home.

CARROLLTON, Ala. -- The Pickens Academy boys evened their record with a 60-24 win over Coosa Valley in Tuesday's home game.

Reagan Presley and Allie Grace Sanford each scored for New Hope. All three goals from both teams came in the first half.

Christian Juarez added a score for the Trojans.

New Hope's next match is Thursday at home against Columbus.