'I think she's on her way to doing something special': Inside Rickea Jackson's inner circle and her drive toward college basketball superstardom 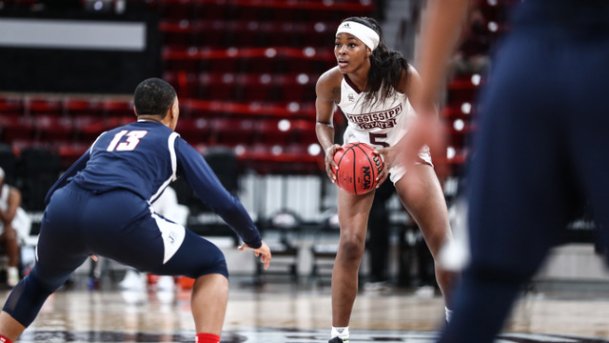 In short, the group is Mississippi State sophomore forward Rickea Jackson's closest confidants. It's her eldest brother, Rickey Jr., whom she spent her youth looking up to. It's her high school coach, Monique Brown, who spends long wintry nights in the gym at Detroit Edison Public School Academy coaxing her through extra shots. Godparents Debra Walker and Wilbert McCormick, both former players in their own rights, are members, too. And, finally, there's her mother, Caryn.

Over the years, the group has served as a support system for the budding superstar. It's those who answer Jackson's calls and texts to head to the gym despite mounds of freshly laid snow. It's the folks who send her articles in which reporters have criticized her game, hoping to motivate her. It's the collection of souls who, when coaching changes, global pandemics and other varying obstacles prove too much, are there for encouragement.

Put simply, The Circle is what's driven Jackson, now one game into her second season at MSU, to the precipice of women's college basketball superstardom.

"It's just helped shape me into the person I am today," Rickea told The Dispatch of her core contingent. "Everyone has played a huge part in my development and my mental health. They're just always there, and I'm just very, very grateful."

Rickea Jackson's movement across the floor at Humphrey Coliseum is graceful yet forceful. She glides across the hardwood with purpose, dribbling by defenders, skying toward the rim, pouncing on loose balls and splashing home step-back jumpers. But her ballerina-like swiftness and all-world scoring ability is a more recent revelation.

From birth, Rickea was told she could succeed. Caryn employed encouraging words in her parenting style. She consistently told her only daughter she was the smartest in the room, the strongest in a given group, the best at whatever she put her mind to. But this wasn't done to be vain. Rather, Caryn saw the potential in Rickea and wanted to ensure she showed it to the rest of the world.

That basketball became Rickea's outlet was as much fate as chance. Rickey Jr. played at Adrian College, a Division III school an hour and a half southwest of the family's home in the Detroit area, while Walker and McCormick played collegiately at Cheyney State College (Pennsylvania) and Detroit Mercy, respectively.

Caryn, too, was a standout player in her youth, earning a spot at Kansas before a drunk driver slammed into her vehicle and ejected her and her passenger from the car during her sophomore year.

After rehabbing for more than a year from a surgery that saw two pins installed into her broken wrist, Caryn joined the team at Lansing Community College, guiding the Tigers to the 1996 NJCAA championship.

"(The doctors) didn't think that I'd be able to play again," she said. "But I was determined."

Until about 12 years of age, Rickea was apathetic toward basketball, but a quiet competitiveness festered beneath her skin. It didn't matter whether she was racing to touch the car, slipping on a pair of socks, or making her bed -- she had to be first.

Jackson's preeminent brush with basketball came in her pre-teen years. Having indulged her mother by tagging along to her younger brother Jordan's game, the pair came across Caryn's old high school coach, Virginia Lawrence.

"Did you teach my mom how to play?" Rickea posited.

"I did," Lawrence responded.

"Well, can you teach me?" Rickea asked.

Greeted with glee from her mother and Lawrence, Rickea began her basketball career on the spot.

"Oh my goodness, that was the best day of my life," Caryn said, pausing briefly to provide a caveat. "Next to her being born."

Rickea was a sophomore in high school when she saw her first live women's college basketball game. Debra Walker, who coached Caryn's Brick City Bombers' AAU team during her playing days, offered to drive her goddaughter to Ann Arbor to watch Michigan take on Rutgers.

Both women had skin in the game. Michigan had been among Rickea's first collegiate offers, while Rutgers head coach and Basketball Hall of Famer C. Vivian Stringer coached Walker to the first-ever NCAA Women's Final Four at Cheyney State in 1982.

Looking on from the hard plastic seat backs at the Crisler Center, Rickea was enamored with the women racing up and down the floor. But underneath her bewilderment was a level of ambition. She felt she could perform at the same level as the players on the court.

Rickea set back to work. The fiery competitiveness of her youth manifested itself in late-night shootarounds and a gym rat mentality.

"Gym?" the text message gracing Brown's phone would read at all hours. Feeling an undying bond with her "basketball daughter," the time of day, temperature or circumstance never mattered. She'd be at the gym to work out Rickea.

"The benefit is I'm the athletic director, so I have 24-hour access (to the gym)," Brown said. "And I told her I would never say no because if she wanted to get in, she could. So she took that and ran with it literally."

Walker, too, received similar phone messages. Less than 24 hours after her Detroit Edison squad took home its third straight Michigan state championship, Rickea texted her godmother for a ride. Expecting a trip to the mall to shop -- one of Rickea's favorite off-court activities -- Rickea instead asked Walker to pick her up at 9 a.m. that Sunday to head to the gym.

"She just saw where she could be," Walker said. "And then her mom just instilled in her that you can be good, you can be the best, or you can be great. And I think she's on her way to doing something special."

Twenty-six minutes into a phone call with a Dispatch reporter, Caryn reveals an anecdote from the previous November.

Despite a 2-0 start to the 2019 season, MSU coach Vic Schaefer was asked endlessly about his star freshman's play. To that point, Rickea had struggled. While the Bulldogs downed UT Martin by 36 points in an early November contest, she mustered just 10 points on 22.2 percent shooting. The Dispatch's headline the next morning read in bold, block letters, "MSU women blow out UT Martin, but Rickea Jackson's struggles persist."

Spying the story on Twitter, Caryn sent it to Rickea. The plan was not to alert her to the negativity but to give her an understanding the world was watching. It was on her to write her own narrative.

Rickea took her mother's words to heart. She finished the year averaging 15.1 points and 5.1 rebounds per game under intense scrutiny. Outbursts of 23 and 29 points against LSU and Kentucky in the Southeastern Conference tournament followed as MSU reached the championship game before falling to No. 1 South Carolina in the final. National honors rolled in, too. She was named an WBCA All-America Team honorable mention, second team All-SEC and SEC all-freshman team at season's end.

But as the COVID-19 pandemic began its rapid ascent across the United States, Rickea's seemingly rock-steady world collapsed. The NCAA tournament was called off. Players were sent home from campus with little closure. And then on April 5, the final nail slammed home as Schaefer and his staff departed MSU for Texas.

"100 percent it hurt," Caryn said. "It hurt because of the bond she was building."

Rickea's future quickly came into question. Calls from players nationwide flooded her phone. Messages from MSU fans and other schools filled her social media feeds. Would she stay in Starkville?

Back home in Detroit at the time, Rickea took some time away from basketball. She needed the space to clear her head. With a fresh perspective, she approached Caryn in the days that followed Schaefer's departure.

"I chose Mississippi State," Rickea told her mom. "I didn't choose the coaches."

When news broke that Nikki McCray-Penson had been hired from Old Dominion, there was a level of comfort in the Jackson household. A former assistant at South Carolina, McCray-Penson was among the first major college coaches to reach out regarding Rickea when she was just a seventh-grader.

In the months since McCray-Penson was hired, she's challenged Rickea to take the next steps in her progression. She's oft mentioned her star sophomore must be ready to shoot upon stepping off the bus while finding sensibility in her shot selection.

"I think the sky is the limit for Rickea Jackson," McCray-Penson said Tuesday. "For her, I don't want to put a lot of pressure on her or added pressure. She's got to continue to embrace practicing at a high level every single day, and the game will become very easy for her, and there won't be pressure."

For a team that brings back the bulk of its roster from a 27-6 team a season ago, Rickea is ready for a prime role. So much so, she was named a candidate for the Naismith and Wade Trophies honoring the National Player of the Year in women's college basketball.

Caryn notes she always challenged her daughter to match her workload to three years ahead of her current standing. As a freshman in high school, Rickea was expected to play like a senior. As a sophomore at MSU, she'll be tasked with performing like a senior or first-round WNBA draft pick.

In public, Rickea is subtle, quiet and caring. She's charismatic but ever so slightly reserved. With those in The Circle, she's open, persistent and driven. There are expectations among those that know her best, sure, but the group is also there for support. In their mind, Rickea Jackson will be the best player Rickea Jackson wants her to be.

"The thing that stands out with Rickea is that, just like other great athletes, a lot of people see that maturation and the end result," McCormick said. "But they don't see the countless hours of work that person puts in to get where they are."