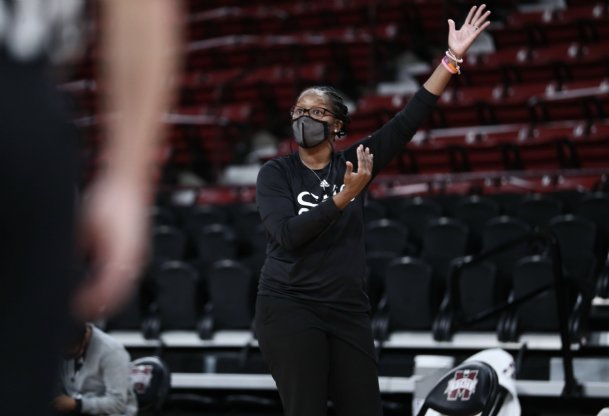 STARKVILLE -- Nikki McCray-Penson is getting reinforcements at the semester break.

KN'isha Godfrey, Mississippi State's top-rated recruit in the class of 2021, told The Dispatch Wednesday that she will be immediately eligible to play this season upon enrolling early this spring.

A 5-foot-9 guard out of Florida, Godfrey is rated a four-star recruit, the No. 8 point guard and No. 40 overall recruit in the class of 2021 according to ESPN HoopGurlz. She previously committed to MSU on May 29, while the school confirmed she had signed on Nov. 11.

Godfrey is one of three high school players to sign with the Bulldogs in the 2021 class including fellow four-star recruits Jasmine Shavers (No. 55 player in the ESPN HoopGurlz class of 2021) and three-star prospect Mia Moore (No. 20 point guard in 2021 class per ESPN HoopGurlz).

Godfrey's eligibility going forward will not be affected by playing this spring. The NCAA ruled earlier this fall that athletes will not lose a year of eligibility for participating in competition this year due to uncertainty regarding the COVID-19 pandemic. Thus, Godfrey would remain a freshman during the 2021-2022 campaign.

With Godfrey in the fold, the Bulldog's add another piece to a roster in desperate need of bodies this year. Following the transfers of Chloe Bibby and Andra Espinoza-Hunter coupled with Xaria Wiggins' ongoing battle with a blood clot in her right lung, MSU was down to just 10 players in its season opening win over Jackson State on Sunday.

"I think it has been disjointed, No. 1 because we don't have a full team in which we can scrimmage so we have to rely on our practice guys," head coach Nikki McCray-Penson said Tuesday in reference to being shorthanded. "Because of COVID, to start out, you can only have so many people in the gym and everybody went through this so the fluidity of what I want is not there yet."

MSU is slated for its second game of the season Wednesday night against New Orleans. The Bulldogs will then be off until a Dec. 14 meeting with Troy after their game against Southern Miss, initially scheduled for Dec. 12, was canceled due to COVID-19-related issues within the Golden Eagle program.