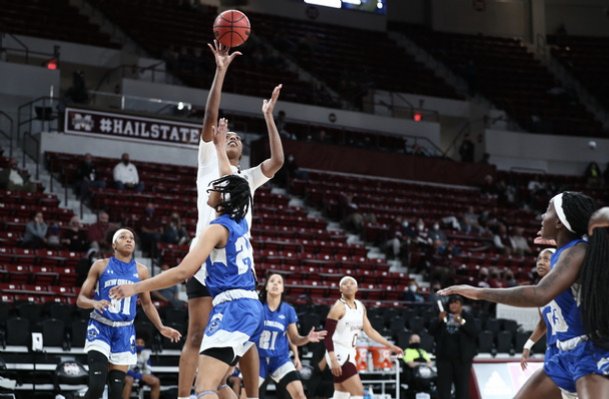 STARKVILLE -- After sputtering offensively through a season opening win over Jackson State last week, Mississippi State's bigs backed up a Brinks truck into the paint at Humphrey Coliseum and cashed in throughout the Bulldogs' 106-51 throttling of New Orleans on Wednesday night.

First-year head coach Nikki McCray-Penson harped on MSU's size advantage against a scrappy New Orleans squad that traveled just nine players, only one of whom stood taller than 5-foot-11, throughout her first midweek media availability of the young season Tuesday. In response, MSU's 6-foot-4-plus frontcourt contingent of Jessika Carter, Sidney Cooks and Yemiyah Morris scored nearly as many points (46) as New Orleans did all night (51), while the Bulldogs notched a 72-12 points in the paint advantage.

"Our emphasis was to get it inside," McCray-Penson said postgame. "We knew that they were going to play a lot of zone and we knew that we had the size advantage."

For Carter, Wednesday served as a glimpse of what her game can be when clicking. A timid and mild-mannered player on and off the court, McCray-Penson has challenged the Georgia native to be more aggressive and fiery in competition. Against an undermanned Privateers team, Carter bowled up, through and around whatever man, zone or double-team came her way en route to a 23-point, 10-rebound performance.

She even offered a brief glimpse of intensity as she finished through contact over a minute New Orleans guard midway through the second quarter, flexing toward the basket after the referee failed to call the bump a foul.

"Even though it's a small team, just to know that I'm finishing around the basket, making those easy buckets -- I feel like that's a big part of my confidence," Carter said through a wry smile. "And for the point guards, they're getting the ball to me. They're feeding me consistently...So I feel like that boosts both our confidence, honestly."

Following a sophomore campaign in which she made the leap from peripheral contributor to focal point, Carter is among the more crucial pieces to MSU's success in McCray-Penson's inaugural season in Starkville.

For what the Bulldogs boast in a plethora of scoring options at guard and the ever-efficient wing Rickea Jackson, they lack in frontcourt depth. Morris showed up in spurts in her first season at MSU after transferring from the junior college ranks, particularly in the Southeastern Conference tournament, but she's more of a complementary piece. Cooks, too, has been lauded for her next-level ability, though she's better suited as a stretch-five type.

In 33 games, she led MSU in rebounding (8.7), blocks (1.8), field goal percentage (.585) and double-doubles (11). But for all her success, there were layers of frustration. Facing South Carolina second team All-American forward Aliyah Boston, Carter was frustrated to just seven points on 2-of-7 shooting between two games against the Gamecocks in Columbia and the SEC tournament final. Carter also mustered just 22 points over MSU's final four games of the COVID-19-shortened 2019-2020 campaign.

"Last year she got a lot of shots off dumps, now we're feeding her the ball," McCray-Penson said. "So now she's got to make post moves and stop fading away from the basket. I don't want her to have to think so much. I want her to play and I want it to be natural for her."

McCray-Penson has consistently held her hope for this year's squad is to maintain a high shooting percentage, tempo and an ability to find and create good shots. Wednesday, Carter appeased her head coach, converting nine of 12 shots, including a 5 of 7 mark from the free throw line, as the Bulldogs enjoyed a 62.9 percent shooting night.

All told, the victory over New Orleans and Carters' stat-stuffing are performances that should be expected of a team that came in at No. 6 in the Associated Press Top 25 poll. For Carter, there will be stiffer matchups come conference time, but Wednesday's game offered a glimpse at a more refined and fiery competitor at the center of the MSU offense.

"If you're bigger than everybody, I feel like you should be able to produce in the paint anyway," she said. "So when we saw that 'Ok, we're getting the ball inside, y'all need to keep it up and y'all gotta score,' that's what we did."