'We're going to win this game for Damian': Tigers rally for Verdell after hard hit, airlift 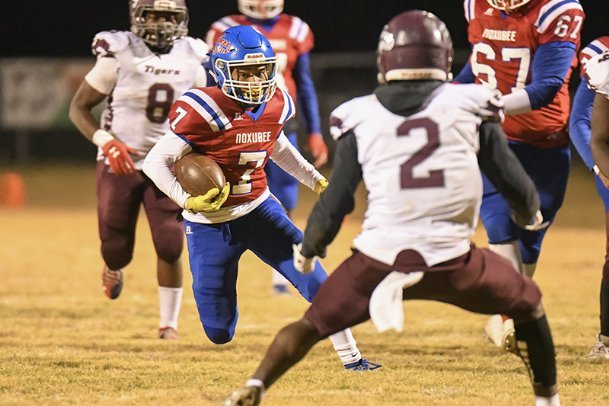 Noxubee County tailback Damian Verdell (7) finds a hole after great blocking from the Tigers' offensive line in a playoff game against Coahoma Agricultural on Nov. 8, 2019, in Macon. Verdell will be available for the Tigers' state championship game against Magee after suffering a mild concussion in Noxubee County's north state semifinal against North Panola. Photo by: Austin Frayser/Dispatch file photo

MACON -- Diesha Verdell was still on her way.

After her family convoy missed the turn that would take them to North Panola High School -- where her son Damian, a senior running back for the Noxubee County football team, was playing that night in an MHSAA Class 3A quarterfinal -- Verdell hadn't yet made it to the Cougars' stadium in Sardis when she got a text from her coworker, Renee Hunt.

Have you checked on your son?

Verdell drew a deep breath and sent a reply.

Hunt relayed what she knew: Damian had taken a hard hit. He was being attended to on the bench.

A few minutes later, as the calls and texts began to roll in and the helicopter braced for landing, Diesha began to realize something: She wasn't going to the stadium after all.

As the first quarter wound to a close, Verdell took a handoff from quarterback Chrishaad Ruper and carried the football toward the Noxubee County sideline. A North Panola defensive end came over to tackle him; as Verdell went down, a Cougars safety dropped low to hit the Tigers running back in the head.

Unable to see the play, Noxubee County coach Teddy Young asked Verdell to come back in a couple plays later. An assistant relayed the word back to Young: Verdell couldn't. He was hurt.

Hunt, whose son Rickie plays right tackle for the Tigers, sent Diesha Verdell a picture of Damian seated on a bench behind the sideline as assistant Earnest Harmon Jr. and a trainer attended to him. It was good he was sitting down and not lying down, Diesha thought.

But once he took a seat, Verdell said, everything got worse. He was dizzy. The back of his neck hurt. He couldn't feel his left arm from the shoulder down. Team staff asked him to keep his eyes open, but his head hurt so badly he kept having to close them.

When running back Bobby Shanklin asked him what was wrong, Verdell couldn't form the words to answer him. He only heard snatches of conversation around him, single words: Helicopter. Memphis.

Though Panola Medical Center in Batesville was only a 15-minute drive south, EMTs manning the ambulance that sat behind the field on site had decided to airlift Verdell to Le Bonheur Children's Hospital in Memphis, Tennessee. Noxubee County athletic director Karen Dixon relayed the news to Diesha, still in the car with her sister Shmeka, her brother in law Tedrick Liddell and her niece Alydia Liddell.

Diesha, who now works as the admission coordinator at Noxubee County Nursing Home and previously worked at Noxubee General Hospital, had seen airlifts before; this one, of course, was far from the same.

It was a "bad moment" for the team, too, Shanklin said. At halftime, trailing the Cougars 14-13, the Tigers made a promise in the locker room: We're going to win this game for Damian.

A win for Damian

Lying on a stretcher, Verdell was bundled into the waiting helicopter, two EMTs behind him in the confined space to monitor his condition. He recalled a shaky ride of 15 or 20 minutes as the chopper motored north.

Upon his arrival, he was sent for tests to check his spine and nerves as well as a CT scan to rule out a skull fracture or brain injury. Someone took Verdell's hand to check his grip; the grasp was weak.

In the car, headed up Interstate 55, Diesha fielded texts, phone calls and FB messages from friends and family, all asking for updates on her son. She tried her best to stay calm and think clearly.

"It was kind of busy on the way, so I really didn't have time to sit back to think to even get anxious or nervous or anything," she said.

With her medical knowledge, Diesha knew what to look for. She stayed on the phone with Dixon, telling her what to ask the EMTs: What was Damian's blood pressure? Had he vomited? Was he conscious? Did he walk off the field, or was he carried?

"She was there with me the whole time, and I greatly appreciate that," Diesha said of Dixon.

The medics' answers were promising: Damian hadn't lost consciousness, and he hadn't thrown up. Diesha took a moment to pray.

"I just felt like he was going to be OK," she said.

'It made me feel good'

When she crossed the Tennessee border and reached the hospital, Damian was undergoing the CT scan. The doctor in charge told Diesha her son's grip had improved with time.

"I'm amazed at how well he turned around, how fast he did," he informed Diesha.

Verdell was diagnosed with a mild concussion and a stinger -- a relatively serious injury but a lucky fate considering the circumstances.

"That probably could have affected him on down the line, after football," Shanklin said.

Shortly after midnight, Verdell was released from the hospital, and the family headed back to Macon. Packed tightly in the car, the four passengers slept.

When they returned -- after 4 a.m. -- they stopped by Verdell's grandma's house, where the football team had dropped off the belongings he had left at the game. That included his iPhone -- full of messages from teammates, relatives and some people he didn't even know.

"It made me feel good," Verdell said.

So did the final score, which he learned while at Le Bonheur, somewhere between the tests and the pain and the worry. Noxubee County had shut out North Panola 26-0 in the second half to win 39-14 and advance. The Tigers had won it for Verdell, like they promised.

But the good news of Noxubee County's win came some bad news -- doctors at Le Bonheur said Verdell was probably out for the rest of the season. If the Tigers were to make the state championship, he'd be unable to compete.

Verdell, understandably, was upset. He attended practices, but he could only watch from the sidelines as healthy teammates prepared for the north state championship game. Still, he kept a positive attitude and a smile on his face -- being the "typical Damian," according to Young.

"To see him walking around, upbeat, that's a great thing," the coach said.

"Being his senior year, that will kind of weigh heavily on you," she said.

Still, Verdell remained determined to get back on the field. On Tuesday, at a follow-up appointment in Columbus, he was cleared to play in Friday's state title game against Magee in Jackson. No matter how the Tigers' season ends, Verdell is getting one more chance to get on the field.

"It's very tough anytime a kid has a neck or head injury," Young said. "That's a scary thing. It's a violent sport that we play, and I'm just happy that he's healthy and doing good."