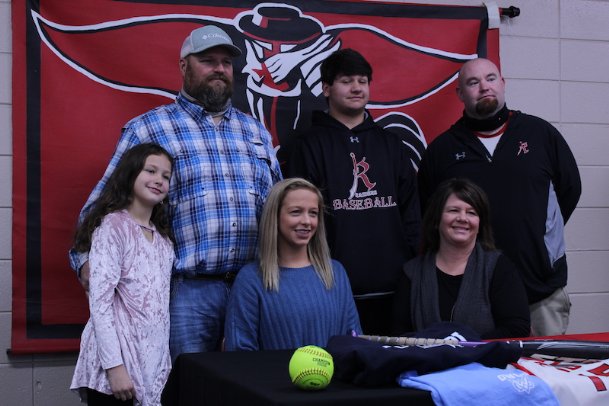 Wooten, who has always wanted to be a nurse, already planned on attending Mississippi University for Women and enrolling in the school's stellar nursing program.

Playing softball, however, wasn't originally in the cards.

It took a query from softball coach Mitch Bohon for the Oak Hill Academy senior to realize continuing her career in the sport made a lot of sense.

"Well, why don't you just go play softball there if you really want to?" Bohon told Wooten at practice one day.

"I was like, 'I'll try that,'" Wooten recalled Tuesday morning, a few minutes after she signed her letter of intent to, indeed, play softball at The W.

"It's really exciting," she said. "I'm really happy that I'm getting the opportunity to go play college-level softball."

The Oak Hill senior has played the sport since T-ball and has blossomed into a star for the Raiders. This past fall, she hit .561, recording 37 hits that included seven doubles, two triples and two home runs. Wooten drove in 25 runs for Oak Hill.

"She's one of the best hitters I've ever had," Bohon said.

Wooten, in turn, credited Bohon's role in her development in the sport.

"He's prepared me for all of this," she said. "All that hard work in practice and him training me is going to help prepare me for the next level."

Wooten played third base and occasionally first base at Oak Hill and hopes to play one of the two positions in college. She also will consider playing basketball at The W but acknowledged two sports plus nursing clinicals, which start junior year, might be too much.

But Wooten has dedicated herself to her craft before and might just do it again.

Although she'll only be half an hour away in Columbus, Wooten said she'll miss the people she knows at Oak Hill when she graduates this spring.

"They've meant everything to me," she said. This is where my family, all my friends are. My mom teaches here. It's really nice being here because everybody knows everybody here, so we're all like a close-knit family here."

But when the time comes, Wooten is ready to move on -- with said family not far away.

"It's going to be really fun," she said. "I'm really excited for the next year."