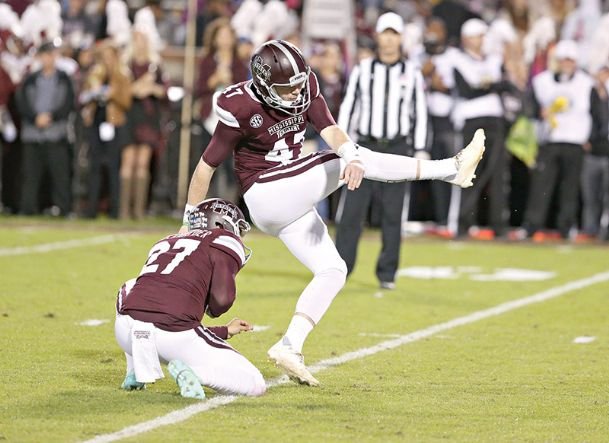 STARKVILLE -- Two Mississippi State players are potentially on their way out.

A source with direct knowledge of the situation confirmed to The Dispatch Tuesday afternoon that senior kicker Jace Christmann and junior offensive lineman James Jackson are set to transfer. Jackson has already entered the transfer portal, while Christmann's status is unclear.

Jackson and Christman both released announcements regarding their potential departures Tuesday night.

"Without even knowing where to begin, I'd like to thank the fan base," Christman wrote. "Nothing in this world compares to (the) sound of 60,000 cowbells clanging together when the Dawgs make a play. You all are the foundation to this program."

Christmann, who is weighing his options and remains with the team despite having entered the portal, currently sits as the program's all-time leader in kicking points (219) and PATs made (123). His 95-straight PAT conversion streak that ended at Auburn in 2019 also stands as an MSU record.

In 2020, Christmann was relegated to backup kicking duties due to the import of Arizona State transfer Brandon Ruiz. According to a source, Ruiz, who's spent much of the time since MSU's finale against Missouri weighing his future plans, is now slated to return to Starkville for another season, though that could still change.

"I will forever cherish my time at Mississippi State and I will forever bleed maroon and white," Christmann wrote. "Big things are on the horizon. Thanks and Hail State forever."

As for Jackson, the Pascagoula native saw time at both offensive and defensive line. He made his first career start in a Sept. 10 loss at Kentucky and appeared in 10 of 11 games this fall.

A former three-star recruit, Jackson was rated the No. 25 player in Mississippi in the class of 2017 according to both ESPN and 247Sports.

"First I'd like to thank God for giving me the ability to compete at a high level," Jackson wrote. "Also, I'd like to thank Mississippi State University and the coaches for allowing me to play the game here the past four years. Starkville has (become) my home throughout my college experience and I'm blessed to have built many bonds that will last a lifetime and I wouldn't trade those for anything."