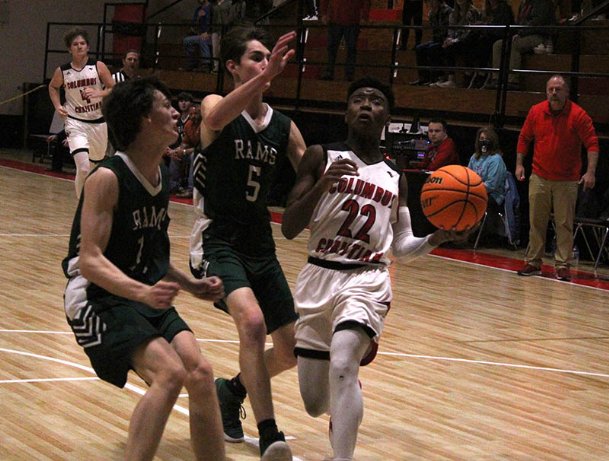 STEENS -- Coach Jason Williams and the Columbus Christian Academy boys basketball team had seen it before.

All season, the Rams had been in close games in the fourth quarter. All season -- with just one exception -- they had lost them.

So when visiting Kemper Academy rattled off 13 straight points to stake itself to a one-point lead with less than six minutes left, Williams and Columbus Christian found themselves heading for the same fate. The hosts just watched as Kemper tossed the basketball around the perimeter with little purpose other than to wind the clock.

But after more than two minutes, Kemper got careless. With 3:35 to go, Columbus Christian's Tyler Looney snagged a poorly thrown pass. On the other end, Joe Michael Edwards drew a foul and made both of his free throws to give the home team back the lead.

This time, Columbus Christian did what its opponents couldn't do: simply hold on.

The victory was Columbus Christian's second of the season, and it perhaps could not have come at a better time. Tuesday's game was the second district contest of the year, and the Rams' next game is Friday at rival Hebron Christian in Pheba.

Consequently, sophomore Jackson Howard said, the win "builds a lot of confidence for (Hebron Christian) this week and especially for the rest of the season."

Williams said he hopes for the same, praising his team's resilience after Kemper shockingly scored the first 13 points of the fourth quarter to take a 34-33 lead.

"I'm proud of the way we played and the way we persevered tonight and how we did things," the coach said. "I very much am."

Before things turned around, Columbus Christian seemed to be headed for yet another loss in similar fashion. The Rams were continually turning the ball over; one pass from Edwards, intended for Looney, flew over the lanky senior's head and crashed into the stanchion behind the basket. Kemper responded with a 3-pointer to cut the lead to one and scored on its next trip down the court.

Then Columbus Christian got the turnover it needed desperately.

"It definitely gave us back the momentum and kind of put the game back in our favor," Howard said.

Given new life, CCA responded quickly. Edwards, who led Columbus Christian with 19 points, sank seven free throws in the fourth quarter alone, and with just under a minute to go, Howard finished an and-one layup inside to put the Rams ahead by six. The sophomore missed his free throw but still finished with 11 points and several nice passes to open men near the basket.

"Jackson played hard tonight," Williams said. "He hit some buckets and played hard, and I'm just proud of that. He just stayed active."

Columbus Christian is a young team -- Looney is the only senior starter, and the Rams start two sophomores (Howard and Drake Shaw) and a freshman (Edwards) -- but Howard said he's starting to see things come together.

Hopefully, he and Williams both said, Tuesday's win will expedite that process for the remainder of the season.

"We haven't been doing very good, but I think it's time we get back on track, and that definitely started it," Howard said.

Columbus Christian junior Morgan Whitten blurted out a quick apology as her momentum carried her over the white line for a lane violation.

It was just about the only thing Whitten and the Rams had to be sorry for.

Whitten led an active defensive effort, senior Audrey Foreman led the way on offense with 17 points, and the Columbus Christian girls rebounded from their only loss of the season to beat Kemper Academy 55-31.

The Rams lost to Winona Christian 46-24 on Thursday and were determined to make up for it, Foreman said.

"We were coming out ready to avenge ourselves, get out there and play hard again," she said.

From the start, Columbus Christian did. The home team got out to a 7-0 lead before Kemper Academy's Sydney Wilson converted on an and-one layup. On the ensuing free throw, Whitten couldn't help but go over the line before Wilson released the ball, but the Kemper player missed both her original foul shot and the redo.

It was an early sign things were going to break Columbus Christian's way.

The host Rams' press defense, which forced Kemper into turnover after turnover Tuesday, was another. The scheme did exactly what it was designed to do, Foreman said: bait opponents into giveaways and set up easy layups or draw fouls.

"Right now, we're not playing with as much intensity as I think we can defensively," Williams said.

Columbus Christian did its best to match that on offense Tuesday. Whitten and DeVos hit 3-pointers as part of a 20-point second quarter that put the home team up 38-11 at the halftime break. From there, the Rams' subs got plenty of time in the game in the third and fourth quarters.

"We love to give everybody a chance to get in, play, score," Foreman said.

Ultimately, the final horn blew with Columbus Christian ahead by 24 points, meeting the expectation the Rams have been trying to set.

"We're just trying to go out there and give it our all and try to win all our games by at least 20," Foreman said.

Heritage Academy's next game is Friday at East Rankin Academy.

Anna Prince had 20 points to lead the Trojans and added five rebounds and four steals.

Nenah Young led the way for the Panthers with 15 points, 13 rebounds and four blocks.

The Vols will host powerhouse Leake Academy on Friday.

Elisha Carter had 15 points for the Eagles in the loss.

Hebron's next game is Friday against Columbus Christian.

The Heritage Academy boys handed Winston Academy an 86-29 thrashing on Tuesday in Columbus.

Jonathan Peal led the Patriots with 19 points. Sam Hannon had 17, Collin Adair had 13, and Whit Altmyer had 12.

The Cavs' next game is Friday at Pontotoc.

Decamby Willis had 21 points and 16 rebounds to lead West Lowndes to a 70-61 home win over French Camp Academy on Tuesday.

Fred Rice Jr. also had a double-double with 21 points and 13 rebounds. Darrell Brooks had 12 points and seven boards for the Panthers.

MERIDIAN -- The Starkville Academy boys picked up a 40-27 road win Tuesday at Lamar School in Meridian.

Rapheal Harris had 28 points to lead the Tigers.

Dash Turman was the leading scorer for the Eagles with 18 points.

Jane Claire Newman had a hat trick for the Cavaliers in the rout.

Caledonia will play Friday at Mooreville.

CALEDONIA -- The Caledonia boys posted a 4-0 shutout of South Pontotoc on Tuesday in Caledonia.

Ethan Rollins had a pair of goals for the Cavs.