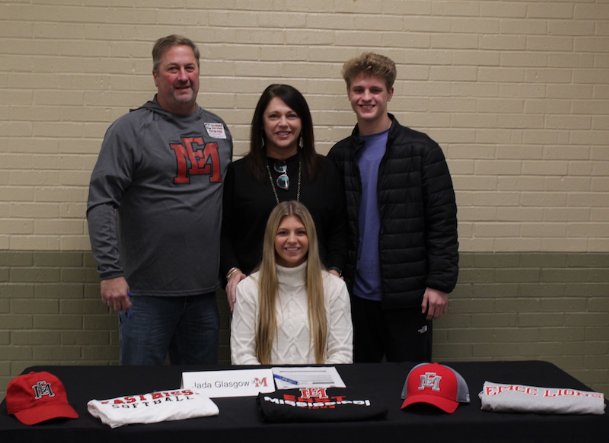 CALEDONIA -- Jada Glasgow felt like a Lion long before the paperwork was in.

On a recent visit to East Mississippi Community College, the Caledonia High School senior softball standout took everything in. She toured a small but growing Scooba campus. She found it easy to talk to the Lions' coaches, Austin McNair and Kimmy Nicholson. And she practiced with the EMCC team, an experience that went far better than she expected.

"They just made me feel like I was already on the team," Glasgow said of the players she met on her trip.

Now, she officially is.

Glasgow signed her letter of intent to play softball at EMCC on Wednesday morning in front of friends, family and coaches.

"Thanks to all the coaches and my teammates for pushing me to be who I am today," Glasgow told The Dispatch.

Glasgow, a shortstop for the Cavaliers, is a top-of-the-order bat and a smooth fielder -- the latter of which she's put in a lot of work to become.

"She's always done a great job at the plate and in the field," Caledonia coach Andy Finch said. "She's worked hard to improve her skills defensively as well."

Although Glasgow will be Caledonia's everyday shortstop again this season, she should have chances to play around the diamond with the Lions. Glasgow said EMCC tried her out at every position when she practiced with the team and that she expects to find a home somewhere in the infield.

But no matter where she finds herself playing, Glasgow can't wait to get started. She said she plans to go into the medical field and said attending EMCC will help her get there.

To Finch, his senior's lofty aspirations are no surprise.

"Jada's just a good leader on the field and in the classroom as well," he said.

The coach said the fact that Glasgow is another Caledonia athlete heading off to college bodes well for the Glasgows, the school and the close-knit community.

But Glasgow said that didn't happen -- for her, at least -- without a ton of hard work. She credited those assembled -- including her parents, her brother and her grandmother -- for helping her achieve it.