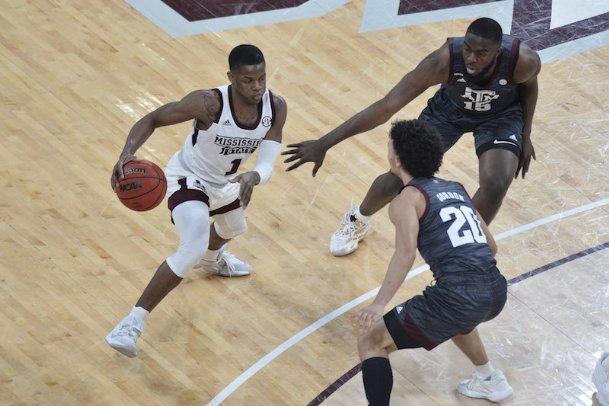 With the Bulldogs trailing by a point with 6 seconds remaining out of a timeout on its own end of the court, Texas A&M deployed a suffocating full-court press. It was a defensive alignment that was utilized for much of Wednesday's contest and disoriented the Bulldogs the majority of the second half.

Buzz Williams utilized the press to throw MSU out of whack one final time in a crushing 56-55 loss at Humphrey Coliseum.

On the final possession, D.J. Stewart, one of the Southeastern Conference's leading scorers, caught the inbounds pass and was instantly swarmed near halfcourt. With the clock ticking down to 3 seconds, Stewart fired a pass to freshman point guard Deivon Smith near the top of the key, who immediately noticed a cutting Tolu Smith. The pass-first point guard fired a rocket to the 6-foot-10 forward, but the pass was harmlessly deflected out of bounds as time expired, ending all hopes of salvaging a victory. MSU coach Ben Howland later lamented his talented freshman should have taken a would-be game-winning shot.

"We were looking to get it to one of (Iverson Molinar or Stewart) and have them attack as quickly as they could," Howland said of the final possession. "D.J. did that: He got it to Deivon in the middle, which is good. He should have shot the ball in that situation because he had a shot. I thought we needed (Deivon) in there in case we couldn't get it to either Iverson or D.J. we could get (the ball) up quick. We had a chance to have a good look there; we just couldn't get it."

With the ball swatted into the tunnel where the visiting locker room resides, MSU players could only look around deflated. A one-time 13-point lead had evaporated. A paltry 34.8 second-half shooting percentage and 15 turnovers derailed what was appearing to be another monumental win, what instead could be a crushing defeat big picture wise for the team's NCAA tournament at-large chances.

"I bet half of those (turnovers) were against the press; that's totally on me, and I take full responsibility for it," Howland said.

Wednesday's loss was a single game, but it was a defeat to a Texas A&M (7-4, 2-3 SEC) team that had struggled away from College Station and lost by double digits in all three of its Southeastern Conference defeats.

"I thought the key to the game was our attack of the press," Howland said. "Their press got better the second half, and we got a little fatigued. What we were doing was a little too tentative; we have a press offense that we never hurt them in."

MSU (8-5, 3-2) was without the services of Javian Davis, who missed his third straight game for an undisclosed reason, and the Bulldogs only deployed eight players in their rotation. Stewart and Tolu Smith played 37 minutes apiece, while Iverson Molinar put in 36. Meanwhile, Texas A&M utilized 13 players in the first half alone.

"I have to use our bench better, because I thought they really wore us down," Howland said.

In a game that featured two offenses ranked near the bottom of the nation in offensive tempo, MSU went on a nearly 6-minute scoring drought early in the second half, watching its 13-point second half lead disappear.

Texas A&M eventually took its first lead since the opening minutes with 2:36 remaining, then stretched the advantage to four points with a minute and a half left. Jalen Johnson cut the deficit in half on the next MSU possession, then had a chance to tie the contest with less than a minute after Jonathan Aku nearly put the Louisiana transfer in a chokehold en route to getting called for a flagrant foul. Nevertheless, Johnson only converted 1 of 2 free throws, and Tolu Smith's go-ahead shot clanked off the rim on the ensuing possession.

"I saw them reading (the play) from behind, so I had to make a read to the middle," Tolu Smith said of his go-ahead attempt. "It was a good read; obviously, the pass just went in and out."

Electing not to foul despite a 6-second difference between the shot and game clocks, Howland's defense suffocated Texas A&M to the point where it couldn't get a shot off, giving the Bulldogs one final possession.

Alas, the Bulldogs will be left wondering what could have been.

Molinar had a team-high 16 points for the Bulldogs on a 6-of-11 shooting performance. Stewart, who has carried MSU for most of this season, had a performance he'd rather soon forget, scoring nine points but only shooting 3 of 14 and committing a team-high five turnovers

"What (Texas A&M does) is sit in the gaps so much," Howland said. "Every time he drove, they had a guy that was helping off someone else. He got called for two offensive fouls because he wasn't coming to a stop. That's what they force you to do in those gaps."

MSU is back in action at 3 p.m. Saturday against Florida at Humphrey Coliseum.