No. 14 Mississippi State blows 12-point first half lead in loss to Alabama 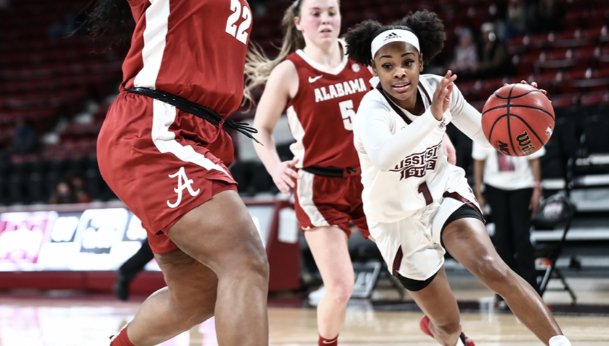 STARKVILLE -- Just three days removed from a snowy sprinkling in Starkville, Mississippi State went ice cold from the field in Thursday's second half as the Bulldogs (8-3, 3-2 SEC) dropped their second game in as many years against Alabama (11-1, 4-1 SEC) 86-78.

Nursing a 12-point second-quarter lead, the Bulldogs' offense fell deafeningly silent despite a relatively raucous, albeit limited, crowd. Having been torched by No. 12 Kentucky from the 3-point line two weeks ago, it was Alabama's net-melting display from the outside that sank MSU for its third loss of the young season.

"It shouldn't take losing to get our attention," junior guard Myah Taylor said. "But we did lose, so we have to go back and see what we did wrong, what we didn't do and just grow from it."

Having inherited a team that ranked in the top 10 among most major polls heading into the 2020-21 season, Nikki McCray-Penson suffered another early setback in her opening campaign in Starkville. Following a coach in Vic Schaefer who took the program to unprecedented heights, expectations have remained, fairly or unfairly, sky high. With losses to Kentucky, No. 16 South Florida and, now, Alabama, critics have crawled out of the woodwork to critique the earliest days of MSU's most recent head coaching hire.

But for McCray-Penson, the 2020-21 remains a balancing act, drawing on positives and taking a team loaded with talent and adjusting it to the ebbs and flows of a new coaching staff and a season being played under unprecedented conditions.

Take Thursday's start, for example. Having slogged through the early minutes game after game this winter, the Bulldogs played inspired basketball for much of the first half and, more specifically, the first quarter. Shooting a combined 69.2 percent from the floor over the games opening 10 minutes, MSU hit 8 of its first 10 shots on the night courtesy of a new look starting lineup in which guards Aliyah Matharu and Madison Hayes in place of Rickea Jackson and JaMya Mingo-Young.

For Hayes, Thursday proved a coming out party of sorts in her budding Bulldog career. A gritty defender and rugged rebounder through the early part of this season, she flashed an ability to beat defenders off the bounce and fight through contact in and around the rim as she notched six first-half points in a balanced Bulldogs scoring attack over the first two quarters.

Jackson, too, looked momentarily reinvigorated after she was demoted to bench duty. Within the first 45 seconds of the second quarter, she beat her defender for a slippery layup before banging home a 3-pointer from the right wing on the ensuing MSU possession. Jackson knocked down her first four shots of the night as she notched nine points in just 13 first-half minutes played.

But as the game wore on and the Bulldogs' defense soured against a dynamic Alabama attack, Jackson's offensive flow faltered. She scored just six points over the game's final 20 minutes, committed two turnovers and finished the second half with a -17 plus-minus rating.

"When Rickea has energy on both ends of the floor, we're a different team," McCray-Penson said postgame. "But again, for 40 minutes, we didn't lock into the game plan, and it hurt us."

For Alabama head coach Kristy Curry, there's a familiarity with McCray-Penson's position. In 1999, Curry inherited a Purdue team that Carolyn Peck led to a national title the year before. Speaking with the media following the Crimson Tide's victory, Curry was queried on how she dealt with inheriting a squad with absurd expectations and what advice she might offer McCray-Penson.

"I think you have to be you and I have no doubt she's doing that," she explained. "Obviously they lost a couple of key figures from a year ago, and I think some of those kids are still trying to fit into their roles. Nikki's going to do a great job, and she just needs to be herself, and that's all she can control. Her energy and effort is incredible, and she's poised to continue to do great things."

On a night in which MSU donned warmup shirts with an old photo of McCray-Penson and legendary Tennessee head coach Pat Summitt in honor of the late hall of famer, the loss was a reminder of the difficulties of finding success and, perhaps, a further indicator of how impressive Summitt's decades of dominance were.

In reality, the Bulldogs have dropped two games to ranked opponents and a third to an Alabama team that received votes in last week's Associated Press Top 25. But for McCray-Penson and her squad, night's like Thursday are, in their view, unacceptable under any circumstances. For the Bulldogs, games like the Alabama loss can't happen should they hope to return to women's college basketball's mountaintop.

"I think the biggest thing that I told them is that we can't lose games like this," McCray-Penson said. "Not when the game's in control."