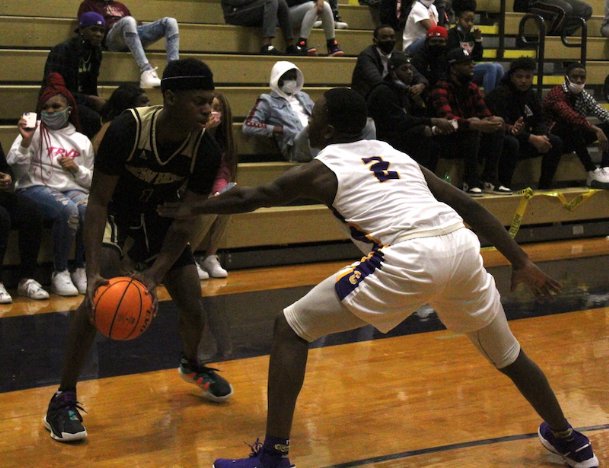 Eric Caldwell didn't even have to look.

With under a minute left in the second quarter of Friday's game at Columbus High School, the New Hope High School senior slashed through the right side of the Falcons' defense and delivered a no-look pass to a waiting Carson Latham on the inside, resulting in an easy layup.

The basket pushed the Trojans' lead to 10 points -- it was 12 before the half -- and 16 minutes of basketball later, New Hope (11-2) had claimed a 60-39 road win over Columbus in Caldwell's first game on his old home floor since transferring from Columbus High after last season.

"It kind of did feel weird, but I got the butterflies out," the senior said of stepping into the Falcons' gym as a visiting player for the first time.

Any nerves Caldwell had early on didn't show as he led the Trojans with five points in the first quarter. The senior finished with 10, part of another equitable scoring effort from New Hope: Jorden Edwards led the way with 15 points, Caleb Parr had 11, and LJ Hackman matched Caldwell's total.

"When you've got multiple weapons who can attack and share the basketball and guys who shoot it, it's always nice," New Hope coach Drew McBrayer said. "For us to be what we need to be come playoff time, we're going to have to have that balanced scoring."

The Trojans are certainly rounding into form with less than a month to go before the MHSAA Class 5A, Region 2 district tournament and the postseason begin. Columbus, meanwhile, has struggled to an 0-2 start in district play, but coach Phillip Morris was optimistic about a turnaround.

"We've got a lot of time until that district tournament," he said. "We've just got to find our way."

The Falcons were a ways from it Friday in part due to a roster that remains in flux. Malik Moore is now under COVID-19 quarantine, Ethan Conner just returned from it, and star Blake Burnett is not currently with the team.

Despite that, Columbus hung around for nearly a half by executing its two main keys: limiting turnovers and stopping a good-shooting New Hope team from making 3-pointers.

But the Trojans couldn't be held in check forever. A few minutes after the Falcons, led by junior Tre Dismuke with six points, made a small run to tie the game at 12-12 going into the second quarter, McBrayer issued his players a directive.

"Stretch the lead out and come in (to halftime)," Caldwell recalled. "We're going to take them out before they can get their rhythm going."

New Hope forced the Falcons into a zone defense -- man-to-man is Morris' preferred scheme -- and scored seven straight points to push the score to 24-16 and added six more after a Columbus bucket. By the half, it was 30-18, Trojans. Columbus never threatened again.

McBrayer credited his team's play all around, particularly in areas that often go unnoticed on a high-flying, high-scoring Trojans team.

New Hope won for the sixth straight game since losing to Starkville, which scored a whopping 110 points in Friday's rout of South Panola. McBrayer said the Trojans have only improved at sharing the basketball despite limited time on the floor, and they're excited for what's to come.

"I feel like the more we play with each other, we're going to continue to gel and get even better, so I look forward to that," Caldwell said.

Myra King is used to her Columbus teammates going crazy whenever someone makes a big shot in practice.

On Friday night against New Hope, the junior guard got a chance to relive that feeling in a much more important situation.

Twice in quick succession during the third quarter, King buried critical 3-pointers from the left corner -- right in front of her bench. Both times, the Falcons' reserves erupted in cheers directly behind her.

"In the game, with everybody out there, it just makes you feel great," she said.

Pair that reception with the role King played in helping the Falcons pull away from the Trojans en route to a 39-25 win that avenged Columbus' loss to New Hope in last year's district championship.

"We let that one slip last year, but I'm glad we could get it back," senior guard DJ Jackson said.

The Falcons came into Friday's game more than motivated to improve to 2-0 in district play and help smooth over the 35-34 upset loss to the Trojans last year in Grenada, a defeat that cost Columbus a first-round bye in the MHSAA Class 5A playoffs. While the Falcons went on to win their first-ever state championship, the contest lingered in their minds.

"They remember that last year they beat us, and we wanted to make sure that they didn't beat us this year," Columbus coach Yvonne Hairston said.

Trying to do just that, the Falcons got in their heads a little too much, leading to an excess of turnovers early on. Their lead was just five points after the first quarter and nine at the half.

But Columbus quickly made amends. To start the third quarter, Jackson made a 3, MaKhya Weatherspoon sank a midrange shot, Charity Yeates split a pair of free throws, and King hit her first 3 of the night.

"We've been working on that shot, and she was able to stick a couple of them out there," Hairston said of King, who finished with eight points. "She's been in the gym working extra hard to make sure that she's finishing and make sure that she's helping DJ out to be able to shoot the ball."

With King's triple, the score had gone from 19-10 to 28-10 in less than three minutes. New Hope never got much closer until the closing minutes.

"The difference tonight was they made runs, and we never really made a run," New Hope coach Nick Christy said. "We were just chipping away, and they would run out there and get five in a row."

Christy said the Trojans' defense was improved from a 40-34 loss to Grenada on Tuesday but acknowledged his team has work to do on the offensive end to compete in games like Friday's low-scoring contest.

"Clearly, we want to shoot the ball a lot better than we did tonight," Christy said. "It makes you work even harder on defense when it feels like there's a lid on the rim, because you've almost got to be perfect on defense if you can't put it in."

But New Hope wasn't perfect -- neither was Columbus, for that matter. Both Hairston and Jackson pointed out that the Falcons didn't play at their best Friday.

Part of that, they acknowledged, is due to an unusual schedule thanks to the COVID-19 pandemic. Friday's game was just the Falcons' second contest in more than a month.

"It is tough because we have to build our team chemistry again," Jackson said. "We have to get our wind back under us. We have to rebuild as a team.