No. 14 Mississippi State blown out by No. 8 Texas A&M as serious questions arise 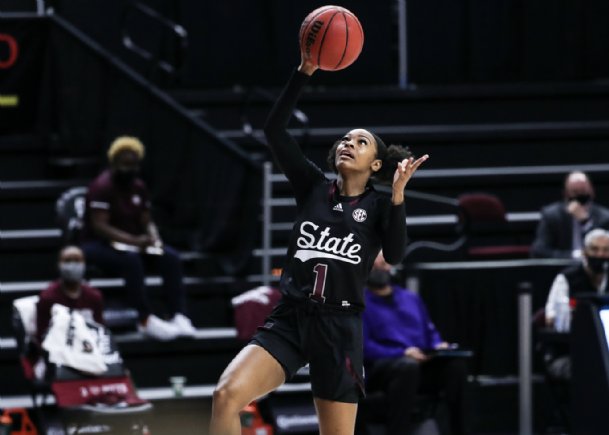 Mississippi State guard Myah Taylor led all scorers with 11 points at halftime as the Bulldogs were blown out by No. 8 Texas A&M Sunday in College Station, Texas. Photo by: Mississippi State Athletics

Two states, 575 miles and nearly nine and a half hours away, Mississippi State (8-4, 3-3 SEC) offered a haunting look at its growing gap from the nation's elite Sunday in College Station, Texas.

Dropping its second Southeastern Conference contest since Thursday, the No. 14-ranked Bulldogs fell to No. 7 Texas A&M (13-1, 5-1 SEC) 69-41 in a game that was less close than the score might indicate. In short, first year head coach Nikki McCray-Penson's bunch was uninspired, ill-prepared and downright dominated for all 40 minutes of Sunday's Lone Star State swing.

"Folks, that's not Mississippi State that we all know and what they've earned over the last few years," Texas A&M head coach Gary Blair said postgame. "And Nikki will get them right back to where they are. I know what it's like on the road...the road can be tough, particularly in the SEC."

That the Bulldogs even remained even within striking distance early against the Aggies was perhaps the most impressive feat in a start that took "ugly" to the next level. Notching a program-low three points in the first quarter, the Bulldogs shot a combined 7.7 percent from the field in a 1 of 13 start.

Sophomore sensation Rickea Jackson, who was relegated to the bench in Thursday's loss against Alabama, returned to the starting lineup only to miss her first seven shots of the afternoon.

Junior forward Jessika Carter, too, was rendered utterly meaningless for the umpteenth time against stiff competition as she earned two early fouls and spent the bulk of the first half on the bench. When on the court Carter failed to make an impact. Too often she was stymied from reaching her spots, settling for fadeaways, lacking any semblance of offensive rhythm that has helped her lead MSU in scoring night in and night out.

Instead, it was junior guard Myah Taylor who shouldered the offensive load in one of the more uninspired halves of MSU women's basketball in recent memory. Normally lauded for her all-world assist to turnover ratio and facilitating ability, Taylor led all scorers at the break with 11 points, including a 3 of 6 mark from 3-point range.

"From the start, we knew that they were going to change defenses against us," McCray-Penson explained. "We've been working against it. We just acted like we didn't know what was happening. We didn't play well. It is that simple."

Miraculously trailing by just seven points at the half in a gap that felt wider than the Mariana Trench runs deep, MSU returned to the floor with the same lackadaisical and sloppy approach that led to its dismal first quarter. The Bulldogs notched seven turnovers in the third quarter compared to just three assists, while Texas A&M outpaced the visiting maroon and white 24-12 over the frame.

Speaking with reporters postgame, McCray-Penson revealed the Bulldogs held a "pow wow" to discuss Sunday afternoon's affair. The discussion was a chance for players to voice grievances, take pride in what's next and how best to address the lack of grit and toughness -- staples of the Vic Schaefer era that have suddenly been lost -- going forward.

For MSU, Sunday's dismal effort was a staunch reminder of how far the program has to go. There are excuses, sure. MSU is breaking in a new coaching staff and boasts just four returners who played meaningful minutes last year. But for a team that entered the year ranked in the top-10 nationally and was expected to compete for an Elite Eight spot and potentially a Final Four berth, the Bulldogs are teetering more toward fighting for an NCAA tournament chance at all rather than angling for the zenith of women's college basketball.

This isn't to say the wheels have completely fallen off in Starkville. The Bulldogs still have nine conference games remaining, including a 10-day layoff before Dawn Staley and No. 5 South Carolina come to town. Opportunities against No. 17 Arkansas and No. 23 Tennessee are also on the ledger over the next four weeks. But should the Bulldogs continue to turn in performances like Sunday, more and more questions will persist regarding the future of the program and its first-year leader in McCray-Penson -- and rightfully so.