'This is the biggest game of the year': Mississippi State men ready to clash with Ole Miss for first time in 2021 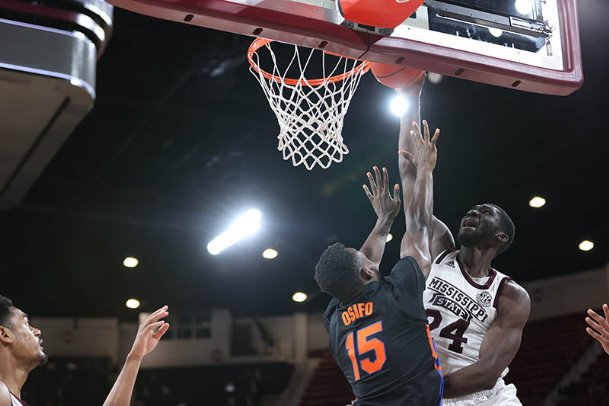 After feeling under the weather against Florida, Abdul Ado feels much better ahead of Mississippi Stateâs matchup with Ole Miss, according to MSU coach Ben Howland. Photo by: Mississippi State athletics

STARKVILLE -- Almost predictably and without fail, you can count on Mississippi State men's basketball coach Ben Howland to say something paying homage to the "one game at a time" cliche every press conference.

The next opponent on the docket could be an Anthony Davis-led Kentucky team, the Fab Five or a directional school you've never heard of, the sixth-year MSU coach will always tell reporters his team is approaching each matchup with the same mindset. Well, maybe with one minor exception.

In the continuation of a historic rivalry, Ole Miss and MSU will meet for the 263rd time at 8 p.m. Tuesday at Humphrey Coliseum.

"I think both teams are always up for this game being a long-standing rivalry in the conference," Howland said. "Of all the SEC teams that play basketball, Mississippi State and Ole Miss have played the longest and played the most games. Our fanbase in this state and as we know living in this state, understand this is the biggest game of the year for everybody each and every year."

Both teams enter Tuesday eager for a win, but for vastly different reasons.

MSU, picked 12th in the Southeastern Conference preseason poll, has surpassed expectations and is fighting for its first 5-2 start in SEC play since the 2008-2009 season. More importantly, the contest marks the finish of a three-game homestand before the Bulldogs venture out for four straight SEC road contests. From a record standpoint, Howland hasn't had a plethora of success in the rivalry in his MSU tenure, accumulating a 4-6 mark against the Rebels. But the Bulldogs have won 16 of the last 20 meetings against Ole Miss at Humphrey Coliseum.

The Bulldogs will prepare for a unique 1-3-1 zone defense the Rebels utilize under Kermit Davis, which gave them fits after they committed 17 turnovers in a blowout loss in Oxford a season ago before countering with a 25-point victory in Starkville in the second meeting.

"They do a great job with their 1-3-1 and really force a lot of turnovers," Howland said. "That's something Kermit has always done with his team whether it be Middle Tennessee State or Ole Miss."

It's true that Davis' bunch has caused chaos on the defensive end of the floor this season, ending 25 percent of their defensive possessions with a turnover, the 10th-best margin nationally according to KenPom.com. But lack of outside shooting (around 29 percent from beyond the arc as a team) and poor execution down the stretch has Ole Miss sitting at 6-6 overall and 1-4 in SEC play. The Rebels have lost three SEC contests in a row with two of the three defeats coming in Oxford.

"Ben has done a good job with the team, and I expect a hard-fought game in Starkville Tuesday," Davis told the Ole Miss radio network following Saturday's 78-74 loss to Georgia.

Devontae Shuler (14.1 points per game) and Romello White (11.2 PPG) are the leading scorers for Ole Miss, which like MSU, is shooting below 67 percent from the free throw line.

"They are a really talented team," Howland said of Ole Miss. "I think their team has so much depth, and it is one of the things that makes them so difficult. They can play a lot of guys. This is a really good defensive team, and they've been at the top of all the defensive stats if you look at defensive field goal percentage and forcing turnovers.

"They really get out and pressure you. Not only is the 1-3-1 zone part of what they do but they are really good in man-to-man. They are doubling the post more than they've done the previous two years under Kermit. So they are adding things to what they are doing and forcing more baseline in their man-to-man defense."

After a four-game absence that wasn't academic or disciplinary related, Howland said MSU forward Javian Davis is expected to play against the Rebels on Tuesday. Davis, averaging 4.5 points and 5.5 rebounds per game, is typically the first post player off the bench for the Bulldogs, a role that has subsequently gone to Cameron Matthews and Quinten Post in his absence.

"He will practice today, which is his first practice in terms of getting a lot of time out there on the floor," Howland said of Davis. "Prior to the Florida game and on the day of the game, he could have practiced some, but it made no sense because we knew he wasn't going to be able to play. So he's been getting good conditioning in and working out hard. So we expect him to play minutes tomorrow."

Meanwhile, senior center Abdul Ado played in Saturday's game against Florida but told reporters he was shivering in the locker room at halftime due to an illness. The sickness wasn't related to COVID-19, as Ado tested negative multiple times in the week, including as recently as Friday. He still scored 11 points on 5 of 5 shooting and grabbed nine rebounds.

"You know what, it's funny how many athletes, if you talk to guys, that played games when they were sick or didn't play well, it is amazing how some of the best games ever are guys that played when they were not feeling well," Howland said. "I know the most points I ever scored in a high school game, I was really sick.

"But if you ask any athlete if they played sick or hurt, they will tell you. I don't know what it is. I don't know if it is a focus you get because you've been dealing with so much and are locked in."