In crucial moments, Mississippi State women's basketball is losing production from its most important pieces 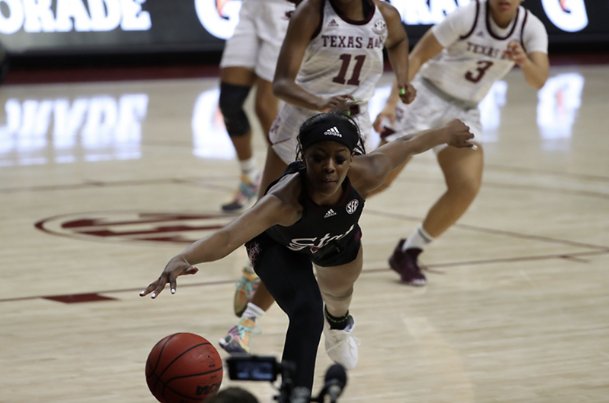 STARKVILLE -- In a game Mississippi State needed them most, its brightest stars were held largely silent.

Sunday's 69-41 throttling at the hands of No. 8 Texas A&M was disheartening on plenty of levels. It was a chance for the Bulldogs to claw their way back from an upset loss to Alabama three days prior. It was an opportunity to re-cement themselves toward the top of the Southeastern Conference ledger. Instead, it proved more an indictment on how far the program has to go and how mortal MSU is when its stars aren't clicking.

"First of all, we just did not play well tonight at all," head coach Nikki McCray-Penson said Sunday. "From the start, we knew that they were going to change defenses against us. We've been working against it. We just acted like we didn't know what was happening. We didn't play well. It is that simple."

Turning in a program-worst three points in the opening quarter in College Station, the Bulldogs' top-two leading scorers -- junior Jessika Carter and sophomore Rickea Jackson -- were nowhere to be found.

For Carter, Sunday is the latest in a string of recent slow and relatively average outings despite her gaudy 15.6 points and 9.2 rebounds per game. After making just one of her first seven shots in a home loss to No. 12 Kentucky, the former four-star recruit was listless against the Aggies. Marred by early foul trouble, she played just 20 minutes and finished 0 of 7 from the floor. Carter's only points on the afternoon came on a pair of trips to the free throw line, where she hit just one of two shots each time.

The larger issues for MSU's semi-dominant big has come in games like Sunday's when faced with stiffer competition. In meetings with Kentucky's Dre'una Edwards, Texas A&M's Ciera Johnson and South Carolina's Aliyah Boston in last season's SEC tournament final, Carter has averaged seven points and 2.3 fouls per game. Sunday, for example, faced with a physicality and size most teams can't match in her 6-foot-5 frame, Carter struggled to find her footing in the blocks. Instead, she resorted to fadeaway and elbow jumpers that have failed her all too often.

Then there's Jackson. A second team all-SEC performer a year ago, the former No. 5 overall recruit in the 2019 class was expected to take a step forward this winter. There have been spurts of brilliance from Jackson -- take her 30-point outburst against Troy or her 23-point, toe-to-toe effort against Rhyne Howard and Kentucky. But when MSU has fallen short in games against No. 14 South Florida, Alabama and Texas A&M, it's come, in large part, due to Jackson's ineffectiveness from the floor.

In MSU's losses this season minus the Kentucky game, the Michigan native averaged 14.7 points -- roughly one point below her season average -- on 52.9 percent shooting. And while those numbers aren't quite as grim as Carter's might appear, it's how they've come together that's more pressing. In Sunday's loss to Texas A&M, Jackson missed her first seven shots and didn't make a bucket until the third quarter. She was similarly stymied early in the loss at South Florida, finishing with nine first-half points but converting just 3 of her first 10 shots.

"When Rickea has energy on both ends of the floor," McCray-Penson explained after the Alabama loss, "we're a different team."

Sunday's shellacking in College Station brought serious questions about where the Bulldogs, who sit at 8-4 and 3-3 in SEC play, stand both in the present and future. With games against No. 4 South Carolina, No. 15 Arkansas and No. 25 Tennessee on the docket over the next four weeks, MSU has its chances to right the ship against a handful of the conference's elite. But should Carter and Jackson be rendered mostly ineffective as they were this past weekend, MSU's teetering season will be sent into a full-on nosedive.