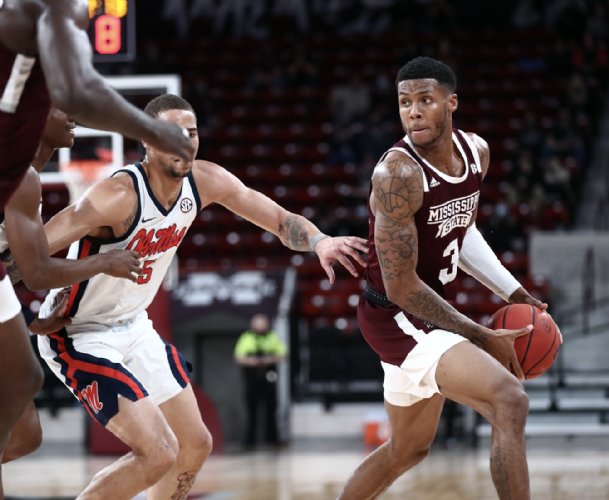 D.J. Stewart had 18 points in the Bulldogs' 64-46 loss to Ole Miss Tuesday at Humphrey Coliseum. Photo by: Mississippi State Athletics

STARKVILLE -- When Mississippi State falls asleep Tuesday night, it will see the Ole Miss zone defense in its nightmares.

A topsy-turvy season for MSU continued as Ben Howland could only watch halfcourt set after halfcourt set fail on the way to his team's second-lowest scoring output of the season. An Ole Miss team that came into Tuesday searching for all kinds of answers crashed the Bulldogs' hype party by blowing up offensive screens and capitalizing enough in transition to run their rivals off the court with a 64-46 blowout victory at Humphrey Coliseum.

"It obviously was a very humbling experience tonight for me and my team," Howland said.

Not one player in the Bulldogs' starting lineup shot better than 45 percent on the night, leading to a paltry 34.6 percent shooting clip.

"We have to be better offensively than we were tonight in order to beat anybody," Howland said. "(Ole Miss) was 1-4 (in SEC play) coming in, they're much better than their record. We knew that going in ... It doesn't matter what the records are, this game is always going to be a dogfight. They took it right to us in terms of energy and how hard they played, give them credit."

Midway through his sixth season, Howland has largely failed to deliver victories against the Rebels, falling to 4-7 in his career against Ole Miss. MSU hasn't swept the Rebels in any year in Howland's tenure, and now the best the Bulldogs can do is salvage a split in their next meeting on Feb. 20 in Oxford.

"At the end of the day, we need to rectify that and do better (against Ole Miss)," Howland said.

The loss itself is all the more puzzling factoring in the margin of defeat to a team that had lost its last three Southeastern Conference games, two of which came at home. But the same Florida team MSU (9-6, 4-3 SEC) beat Saturday decimated No. 6 Tennessee Tuesday despite missing its three best players and red-hot Alabama steamrolled a talented LSU team, is undefeated in league play and may never lose again, so who really knows anything about in the Southeastern Conference?

None of that absolves the frustration MSU fans feel after buying into the team, however young it may be, after a big win, only to be let down one game later. The Bulldogs went from beating a ranked Missouri team, then hanging on for dear life against Vanderbilt and later losing at home to a Texas A&M squad that appears headed toward the SEC cellar. Then, the Bulldogs beat a talented Florida team only to lose by 18 to their in-state rival.

"Some of it is youth, some of it is the ability to handle success," Howland said of the team's inconsistency. "We win a big game, all of a sudden everybody's talking about possibilities for this team and all these people try to get in these kids' ear. We have to stay level-headed ... Any thoughts of something being more than what it is right now is evident. We have to get back to what it was that got us 4-2 (in SEC play) with the chance to be 6-0, because it wasn't there today."

Ole Miss (7-6, 2-4) steamrolled the Bulldogs despite its second-leading scorer, Romello White, being nearly invisible. White picked up two quick fouls four minutes in and only finished with two points on the evening. Nevertheless, Devontae Shuler replaced the since-graduated Breein Tyree as public enemy number one, torching MSU for 22 points on a 8 of 13 shooting effort.

The first half was a slog of both teams wallowing in halfcourt sets, but Ole Miss converted enough fastbreak opportunities and grabbed six offensive boards to give itself a 29-21 halftime lead. The Bulldogs couldn't buy a bucket, shooting at a 36 percent clip in the half. Both of its playmaking guards were stymied by the Rebels' zone, with D.J. Stewart shooting 2-of-8 and Iverson Molinar only making 2 of 7 shots entering the break.

"I thought they did a great job pressuring us and being really physical with our ball handlers," Howland said. "We knew they were going to hard hedge on ball screens and that seemed to give us issues today. I thought our attack of the 2-3 zone was really subpar. We have to do a better job."

Stewart made 5 of 8 shots in the second half to lead MSU with a team-high 18 points, but no other Bulldog scored more than four points after halftime. Even factoring in the better effort in the second half, Stewart has been mired in a slump since he led MSU to an upset victory against Missouri, shooting 19-of-56 from the floor since his breakout game against the Tigers.

"The energy was there," D.J. Stewart said. "Just when the game started it was totally different. They outplayed us, basically."

The only other player in double figures for MSU was Tolu Smith with 10 points, but he fought through foul trouble for the majority of the night a game after a career-high 27-point effort against the Gators.

MSU will attempt to regroup before facing conference-leading Alabama at 5 p.m. Saturday on the road.