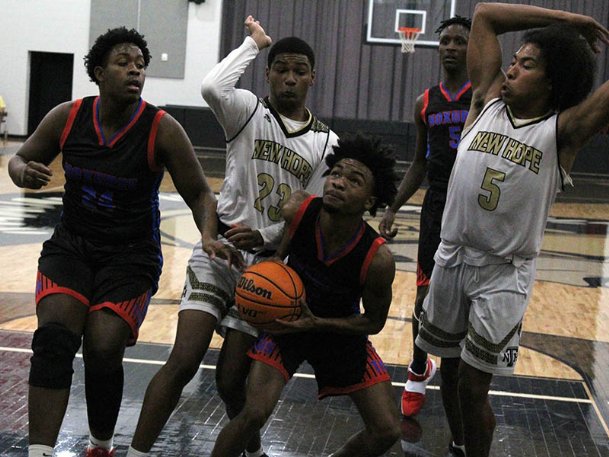 Noxubee County senior Sam Sledge (2) goes up for a layup while being defended by New Hope juniors Caleb Parr (23) and Ty Crowell (5) in the third quarter of Tuesdayâs game at New Hope. The Tigers lost 75-67. Photo by: Theo DeRosa/Dispatch Staff

As the New Hope High School junior sank each of his consecutive 3-pointers in the third quarter of Tuesday's home game against Noxubee County, the same two words were etched into his mind.

New Hope (12-2) did plenty of that in the Trojans' 75-67 comeback win over the Tigers (5-5) on Tuesday as the shots that just rolled off the rim in the first half rippled through the net in the second.

Parr and sophomore LJ Hackman made three 3s apiece in the third quarter to erase a Noxubee County lead that got as big as 11 points in the second quarter and deal the Trojans their seventh straight win in comeback fashion Tuesday night.

"We shot it really well in the second half," New Hope coach Drew McBrayer said.

The Trojans knew their patented spurt of offense was bound to come after a foul-fest of a first half in which New Hope couldn't seem to buy a jump shot. Senior Jorden Edwards' 3 in the first quarter was the home team's only triple of the half as the Trojans were clearly thrown for a loop by the game's glacial pace.

"We like to play fast, and when the rhythm's that slow, it kind of took us out of our rhythm a little bit," McBrayer said.

Noxubee County racked up so many fouls in the first quarter that things had to equalize a bit in the second, allowing the Tigers to get on a run. Guards Sam Sledge and Rafeal Harris orchestrated an 11-0 run to put the visitors up 33-22 late in the quarter before Hackman scored five straight around a Tigers free throw to snap the streak.

Trailing by seven at the break, New Hope went into the locker room knowing exactly what it had to do.

"We just had to get refocused and recomposed and concentrate a lot better," McBrayer said.

Almost immediately, the Trojans did. Hackman had eight straight New Hope points to put his squad on top 38-37.

"I felt like I had to come down and get my team involved," he said.

Sledge and the Tigers responded to pull ahead by six points, but Parr entered the fray with three triples in a row in less than two minutes. Hackman added a deep 3 for the lead, and New Hope emerged from its 25-point quarter with a two-point edge.

"Sometimes when you struggle shooting the ball, the floodgates open, and man, they did," McBrayer said.

New Hope added an Edwards 3 on its first possession of the fourth quarter, and Hackman led the charge as the Trojans kept the Tigers at arm's length the rest of the way.

Noxubee County coach Danny Crawford pointed to his team's poor night from the charity stripe -- 12 missed free throws, including four in the fourth quarter -- as a reason the Tigers couldn't pull the upset.

"That's the ballgame," he said of the wasted opportunities at the line. "That's it."

Still, Crawford said he wasn't upset with a setback to a strong New Hope team in a game that was led by one possession much of the way.

New Hope, on the other hand, never expected to have to say the same. Even when the Trojans were down big, they remained confident that their shots would eventually start falling.

"We knew that we were going to be fine -- just come out here and keep on playing," Parr said.

Anna Prince clapped her hands five times in quick succession as she backpedaled down the middle of the court.

As the New Hope senior celebrated her deep stepback 3-pointer that put her team ahead of Noxubee County by 12 with just over a minute and a half to go, the home crowd performed the same action.

After roaring back from a double-digit deficit early to roll past Noxubee County 49-40, Prince and the Trojans deserved the applause.

"I knew it was my time to step up," said Prince, who scored 16 of her 21 points in the second half as New Hope erased a hole that got as large as 14 points early in the second quarter. The Trojans scored just one point in the first quarter, and their first made field goal came nearly two minutes into the second.

"The first half was definitely pretty rough for all of us," Prince said.

The senior said the strategies the Trojans worked on in practice went by the wayside as freshman Na'Kaiyla Lockett and the Tigers (8-4) jumped out to a 15-1 lead and took a 19-11 advantage into halftime.

Naturally, New Hope coach Nick Christy stressed the importance of fixing those lapses as the Trojans headed into the locker room at the half. New Hope came out in the third quarter, mixed up its defense in order to force multiple turnovers and turned the giveaways into points straight away.

A 3-pointer by Prince and a layup by Madyson McBrayer trimmed the lead to two, and Prince and McGlothin each hit triples to make it a one-point game and force the Tigers to discard their zone defense.

"By hitting those shots, it actually forced them to get out of the zone," Christy said. "They ended up later in the game going to man, and we were able to get in there and get some foul calls and things."

With 1:53 left in the third quarter, Prince sank a layup to give New Hope its first lead of the night, and the Trojans never trailed again. Instead, they built their lead as big as 12 when Prince stepped back from the top of the key and hit her fourth and final 3 of the night to put the Tigers away.

"That's what we needed: a good win and good momentum moving toward the second half of district," said Christy, who noted Noxubee County's 46-44 overtime win Dec. 8 over Columbus, which beat New Hope 39-25 on Friday.

Like Crawford, Tigers coach Micheal Johnson pointed to his team's 5-of-16 night from the foul line as a big reason for Tuesday's loss. (New Hope, consequently, was 12 of 19 at the stripe and made eight of its 10 attempts at the line in the second half.)

"I'd rather take a loss and grow from it than take a win and stay stagnant," Johnson said.

New Hope, meanwhile, felt like it learned its own lesson.

"We're able to beat any team in our district if we just do what we need to do," Prince said.