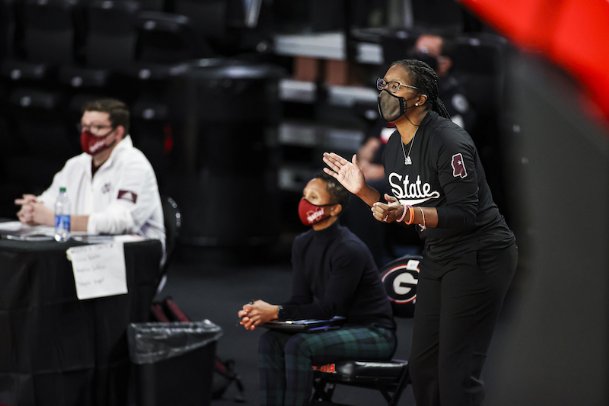 Nikki McCray-Penson knows her defense has to be better as the Bulldogs prepare to take on South Carolina, Arkansas and Tennessee in their next three games. "We're good enough," she said. "We've just got to grow up." Photo by: Pool photo

STARKVILLE -- Mississippi State women's basketball is on the precipice of history, but not in a good way.

Having dropped back-to-back games against Alabama and No. 8 Texas A&M over the past week, MSU has lost two games in a row for the first time since dropping contests to Kentucky and Tennessee over a three-day stretch during the 2016-17 campaign. As impressive, the Bulldogs haven't lost three straight games since the 2013-14 season -- Vic Schaefer's second year at the helm in Starkville.

With No. 5 South Carolina heading to town next week, that streak may be snapped sooner than later.

Sitting at 8-4 and 3-3 in Southeastern Conference play, MSU still has plenty of season ahead of it. But with the impending game against South Carolina followed by meetings with No. 15 Arkansas and No. 25 Tennessee, the Bulldogs are sitting in a precarious spot.

Perhaps the most obvious change to be made in MSU's game is its defense. In their three SEC wins to date, the Bulldogs have allowed just 58 points per game, compared to 82.3 points per game in its three conference losses. McCray-Penson's squad has also surrendered a 45.3 percent shooting clip to SEC opponents in losses this year and, most notably, a 39.2 percent mark from 3-point range.

Take MSU's overtime loss to Kentucky as the preeminent example. While the Wildcats, and, more specifically, SEC Player of the Year front-runner Rhyne Howard, have made a living off torching opposing defenses, the Bulldogs had their chances. Leading by as many as six points, MSU allowed Kentucky back into the game through its failure to guard beyond the arc. In response, Kentucky drained 14 of 28 3-point attempts, including 7 of 13 in the second half and overtime.

If the Bulldogs are, in fact, looking for stoppers, Xaria Wiggins' recent return to the roster should help some. After missing the first six games of the season due to a blood clot in her right lung and sitting for the latter half of the win at Florida and subsequent victory over Ole Miss following a collision against the Gators, Wiggins played 18 and 22 minutes against Alabama and Texas A&M last week.

On the first possession of her first game back against Kentucky, the former four-star recruit forced Howard into a travel at the top of the key before draining a 3-pointer from the wing four possessions later.

Briefly playing alongside sophomore Rickea Jackson and junior Jessika Carter at the forward slots, the group gave MSU some much-needed length in marginally defending the Wildcats' scorching effort from behind the 3-point line.

"That group talked the most," McCray-Penson said at the time. "They made mistakes but they made up for their mistakes with talking."

MSU became a consistent winner in Schaefer's eight years at the helm. During that span, the Bulldogs failed to reach 20 wins just once: 2012-13, Schaefer's first season in Starkville. McCray-Penson isn't quite at a breaking point, but lackluster defensive efforts against South Carolina, Arkansas and Tennessee could send MSU's 2020-21 season into a spiral quicker than preseason prognosticators saw coming.

"We're good enough," she said after the Kentucky loss. "We've just got to grow up."