In control: How Emily Williams became a 'lethal weapon' for Mississippi State softball 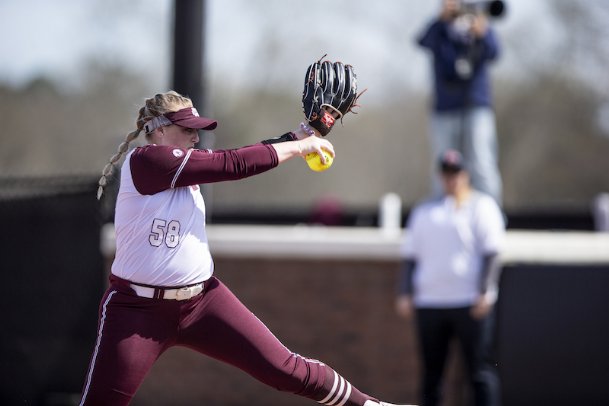 Mississippi State pitcher Emily Williams delivers during a March 7 game against Southeast Missouri State on March 7 at Nusz Park. Williams tossed a complete-game one-hitter with nine strikeouts, one of her best games in a breakout 2020 season. She could be poised for even more success this spring. Photo by: Gabby Zgunda/MSU Athletics

Emily Williams has always been unhittable.

Even as a freshman pitcher at Mississippi State, the Carrollton, Georgia, product took the team by storm. In the first couple weeks of her first fall camp in 2017, Williams blew Bulldogs batters away time and time again.

"We couldn't touch her," Mississippi State coach Samantha Ricketts recalled. "The hitters could not touch a ball off of her. It took us a minute to get adjusted because that's just how naturally gifted she was."

In her three years to date with the Bulldogs, Williams used those intrinsic talents to play different roles. She was a nonconference assassin in 2018 and established herself as the team's No. 1 starter in an up-and-down 2019 campaign.

But it took more than physical gifts for the skilled right-hander to break out in 2020, posting a 0.46 ERA -- good for third in the country -- in the shortened season.

Thanks to a new approach put in place by Ricketts and pitching coach Joshua Johnson, Williams found a confidence in herself and her ability that she'd never had before. It's another tool in the senior's ever-growing arsenal as Williams prepares for another stellar spring in Starkville.

"She's a huge piece of our success -- to our team, to our pitching staff, just in general -- and to have her for another season is really exciting for us," Ricketts said.

From that vantage point, she has a front-row seat to Williams' pitching artistry.

"I swear she's invented a new pitch every day," Ricketts said. "It's just really not fair."

Currently, Williams throws an offspeed rise ball and a fastball in addition to a traditional rise ball. But it was only after adjustments to the last pitch that everything at her disposal began to get significantly more effective.

Williams said she worked with Johnson on throwing her rise ball predominantly for a strike. Previously, she typically threw it for a ball, hoping its movement would induce swings and misses. Now, she was attacking the zone with renewed vigor.

"I had focused on it before, but we just thought about it differently," Williams said.

She and Johnson also reworked how often Williams threw each offering and measured the proportion of her pitches that found the strike zone in practice. The changes helped Williams almost completely eradicate a control problem that plagued her in 2019.

That year, she finished with 148 walks to just 156 strikeouts in 171.2 innings, including tough games: 14 walks in an extra-inning game at Alabama, 12 at Tennessee, 12 at Florida. Ricketts said the free passes typically stemmed from the intense movement on Williams' pitches.

"It might have started as a strike, but when it's breaking six to eight inches vertical, horizontal, whatever it might be, it's hard to keep that on the plate," Ricketts said.

Still, the Bulldogs embraced Williams' occasional erraticity. They knew what was to come.

"It was, 'OK, E-Dub's gonna walk a couple, but then she's going to strike out the side,'" Ricketts recalled. "We didn't allow it to put a lot of pressure on us when she would walk a hitter in a big situation because you knew she had such good stuff that she could easily sit down the next two who were following."

As Williams' control improved, so did her confidence. She increased her focus and her work ethic in the weight room, and she began to grow more talkative and more comfortable speaking out in practices and team meetings.

"She's always been a calm presence (in the circle), but now it's a very confident calm -- just kind of a lethal weapon that we've got out there," Ricketts said.

This spring, that weapon was on full display.

Williams' strikeout numbers ratcheted up significantly as she fanned 75 hitters in 45.2 innings, an average of 11.5 strikeouts per seven innings -- No. 7 in the nation. She issued only 21 walks, cutting down on free passes by nearly half.

It was a sign that Williams had mastered hitting every quadrant of the strike zone with her mix of pitches -- at varying speeds.

"She might come inside with the rise ball, and then she's going to throw the same location, but it's going to be 10 miles per hour slower," Ricketts said. " ... She doesn't have to throw balls. Her balls move so much through the zone, she can really attack a little bit more than she was previously."

Instead of just trying to throw a good pitch every time, Williams said, she was able to keep the ball low in the zone to induce softer contact and trust the fielders around her to make plays. She led the nation in hits per seven innings at just 2.30.

"I didn't give up a bunch of hard contact or anything," she said. "Now, I feel a lot of confidence in the defense and other pitchers."

The latter wasn't always the case. In 2019, when she made 26 starts as a sophomore, Williams felt the strain of carrying the Bulldogs' pitching staff.

"It felt like it was mostly on me," she admitted.

But with the addition of Troy transfer Annie Willis and strong performances from Grace Fagan, Alyssa Loza and others, Williams could share the load.

"Last year, it was spread out a lot more, and there's confidence in everybody on the staff," she said.

The confidence the Bulldogs had in her led to some new roles for Williams, too. She started just four games -- posting complete-game shutouts in three of them -- and earned saves in five.

"She had a lot of pressure situations for us in 2020 and really excelled during that," Ricketts said.

The success Williams experienced last spring -- though tempered by the pain of the season's mid-March cancellation -- will set her up for even more good things to come in 2021 and beyond, Ricketts said. With the extra year of eligibility afforded spring-sport athletes by the NCAA, she'll have two more years in Starkville to continue to make her mark.

"I think she's now starting to buy into that confidence and the, 'Hey, yes, I am this good,'" Ricketts said. "It's been fun to watch that growth come from her, and to continue to see what she can do now with another two seasons is really fun for us to think about."

Ricketts said she already has an idea of what to expect when Williams steps into the circle this spring.

After all, she's seen it before.

"It's not fun when it's our hitters facing her all fall like we did this year, but it's going to be a lot of fun this spring when she's finally throwing against another team," Ricketts said.