Bulldogs hope to bounce back against No. 18 Volunteers Tuesday 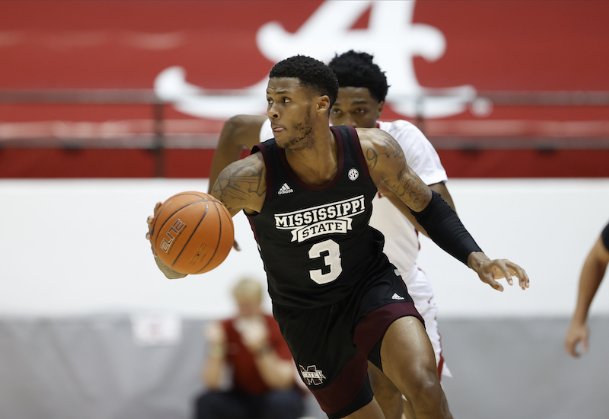 D.J. Stewart (3) and Mississippi State men's basketball hope to bounce back against Tennessee after two straight losses at 6 p.m. Tuesday in Knoxville. Photo by: Alabama athletics

The good: Mississippi State went toe-to-toe with Southeastern Conference leading Alabama on the road Saturday, trailing by as few as three points with just more than 30 seconds remaining.

"I think that we had our poorest game in terms of effort of the year against Ole Miss," MSU coach Ben Howland said. "So, it was a bounce back game no matter who we were playing. It just happened to be Alabama, who is the best team in our league and really playing at eye level. So, it probably even heightened the response even more because they have been killing everybody ... I thought we really played hard and really competed against a very good team."

The bad: Despite bouncing back from a poor outing against Ole Miss Jan. 19, the Bulldogs couldn't pull off the upset, dropping an eight-point contest. There are no moral victories in college basketball, certainly not when looking back at 16 crucial turnovers against the Crimson Tide.

"Taking better care of the ball would be number one," Howland said Monday when asked what the biggest improvement needed on offense is. "When you look at the last game, we had too many turnovers that led to easy baskets. We've got to do a better job at taking care of the basketball and cutting down on our turnovers. I think that's a huge one."

What's more, the second contest of a grueling four-game SEC road trip comes against a stingy No. 18 Tennessee squad at 6 p.m. Tuesday in Knoxville. Tennessee, the preseason favorite to win the league, has surprisingly hit a slump of its own, getting blown out on the road to an undermanned Florida team and losing at home to a very talented Missouri team. But MSU (9-7, 4-4 SEC) has some demons of its own, mainly in a 12-game road losing streak to AP Top 25 opponents. The Bulldogs haven't earned a win in Knoxville since 2015.

"I've watched them all year, and they're really impressive," Howland said of Tennessee. "They have a lot of depth. [Jaden] Springer was out in the last game against Missouri with a sprained ankle. I'm not sure what his status is, but he's a very good player that comes off the bench for them - a really big-time athlete. He may or may not play, I have no idea.

"I think that [John] Fulkerson and [Yves] Pons up front are veteran guys who are really good players. Pons is such a defensive stopper. He's very good at guarding his man. He's also a great shot blocker and plays incredibly hard. They're both good offensive players. Fulkerson leads them in scoring. He's really good."

Springer, a five-star phenom freshman, is averaging 10 points per game this season, and may be vital to the Vols' success. When Springer is in the lineup, Tennessee is 10-0. The Vols have lost all three games Springer has missed.

Tennessee has suffocated opposing offenses, limiting teams to an average of 59.8 points per game. But that's not the most unique stat surrounding the Vols.

"It's amazing, they have seven guys on their team that are left-handed. It's like an all left-handed team I've never heard of. It's like playing a baseball team," Howland said. "I think they start four lefties. They're coming off two losses, so they're going to be bringing their very best effort to the game tomorrow night."

There may be some intrigue surrounding MSU's starting lineup against Tennessee, as normal starter Jalen Johnson only played four minutes in the loss against Alabama, while freshman forward Cameron Matthews filled in replacing him for 32 minutes. Howland, who said Johnson playing limited minutes was a coaching decision, said Matthews gave MSU a better chance to guard Alabama's shooters, but declined on saying if Matthews would be in the starting lineup permanently.

"It's a very new roster," Howland said. "I think our guys have handled their roles. We have freshmen learning on the job. Both Deivon [Smith] and Cameron [Matthews] are getting a lot of minutes. They're growing as players, and they've grown a lot already this season."