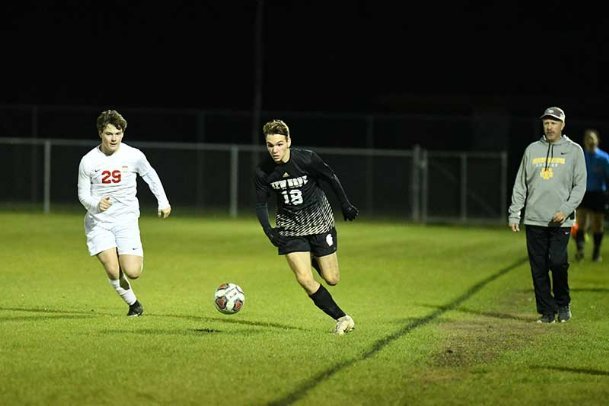 NEW HOPE -- After the New Hope boys soccer team lost its second-round MHSAA Class 5A playoff game to Ridgeland last season, the Trojans sat on the field and watched the Titans celebrate.

They wanted to know what they were missing out on.

"Remember this moment," coach Andrew Olsen instructed his players. "When we work through this next season, that's what we want to work toward: getting past that second round."

Doing so -- and thus reaching the north state championship game -- has been an elusive milestone during Olsen's tenure at New Hope. And while Ridgeland could stand in the Trojans' way again later on, it's Tuesday's first-round matchup with Vicksburg (10-5) that poses New Hope's first test if the Trojans (12-2) hope to break through this season.

The Trojans swept through a division slate comprising Grenada, Columbus and West Point to earn the No. 1 seed in Class 5, Region 1, and book a date with the Gators at home at 6 p.m. Tuesday.

Olsen knows his team will be tasked with handling a speedy, skilled Vicksburg team in order to advance.

A lot of that responsibility will be left up to senior goalkeeper Vicente Lugo and an all-new back line of junior Chance West, sophomores Cole Crawford and Ndy Massey and eighth-grader Austin Minichino. That's because the Trojans lost four senior defensemen -- Cooper Odom, Cole Ruffin, Austin Rickert and Ben Bradley.

But that hasn't stopped the Trojans from being one of the elite defensive teams in Class 5A. Before the season, New Hope set a goal: to allow 10 or fewer goals all year. Through their first 14 matches, Olsen said, they still haven't hit that mark. The Trojans have allowed just one goal since Christmas break -- a penalty kick against Kosciusko.

"I think as the year went on, they've gotten more and more comfortable playing with each other and running the system we run," Olsen said of his back line. "I think it challenges them."

And New Hope's offense is good enough to carry the load even if the Trojans allow a couple of goals. Though the team's only senior in the starting lineup is Lugo in goal, juniors Trey Parnell and Christian Juarez and sophomore Jose Castillo do most of the scoring, while juniors Caden Perrigin and Jack Oswalt and freshman Brant Smith are other key contributors for New Hope.

"Looking forward, it just shows what potential we do have," Olsen said. "We've been pretty good this year, but we've got a good couple years ahead of us if everybody can stay working and stay hungry, so I'm excited for them."

If New Hope can push its way past the Gators, it would set up a matchup with the winner of Tuesday's Ridgeland-Saltillo contest. Olsen said a chance to avenge last year's loss would be sweet, but he knows the Trojans will gladly take whoever they can get.

"Right now we want to beat Vicksburg, but if we make it past, to be honest with you, they would play either one of them. It would always be sweet if we get to play Ridgeland and we could get revenge, but they just want to play, man. They think they can compete against anybody, so if we get past Vicksburg and it's Saltillo or Ridgeland, I think the guys will be ready to step up to the challenge."

The New Hope girls earned a bye to the second round of the playoffs when its scheduled first-round opponent, Callaway High School, had to forfeit the match.

Like the boys team, the Trojans girls swept through their district schedule and won Region 1-5A.

New Hope awaits its second-round assignment against the winner of Tuesday's game between Neshoba Central and Lafayette.

On Tuesday, the Jackets hope for a repeat performance -- on their home field this time.

Starkville clinched the top seed in Class 6A, Region 3 and drew the Chargers for their first-round playoff matchup. Oxford edged Hernando for the second spot in Region 2, with Southaven winning the division.

The Chargers won six straight games before losing in overtime to Horn Lake on Jan. 15, but Southaven's win over Hernando put Oxford in the playoffs anyway.

John West Perry is one of Oxford's premier threats up front, while Dominique Bush and Ethan Pulliam typically carry the scoring load for Starkville.

The winner of Tuesday's game will play the victor of the first-round match between Tupelo and Madison Central.

The Mississippi School for Mathematics and Science boys clinched a playoff spot with a dramatic win over Madison St. Joseph in penalty kicks on Saturday night.

Just three days later, the Blue Waves (5-2, 3-1 district) will take the field again for another critical contest. They'll travel to Amory (12-5, 8-0 district) in a Class I first-round playoff game.

The Panthers recently completed a sweep of Class I, Region 1 play with a 7-0 win over Tupelo Christian Prep. The region also includes Booneville, Nettleton and Vardaman, and starting next season, MSMS will become the sixth team in the district.

For now, though, the Blue Waves will face the Panthers for one final time as non-district opponents. Amory features scorers like Bryn Camp, Reed Stanford and Gunnar Williams up top, and Landon Koehn and Tyler Sledge man the goal.

While MSMS has only played six matches (plus earning a forfeit win), the Blue Waves hope to build on Saturday's momentum to get the win. If they do, they would face the winner of the Winona-Byhalia first-round matchup.

OXFORD -- The Starkville High girls' season came to an end Monday in Oxford with a 6-0 loss to the host Chargers.

The Yellow Jackets finished the year 7-6-1.