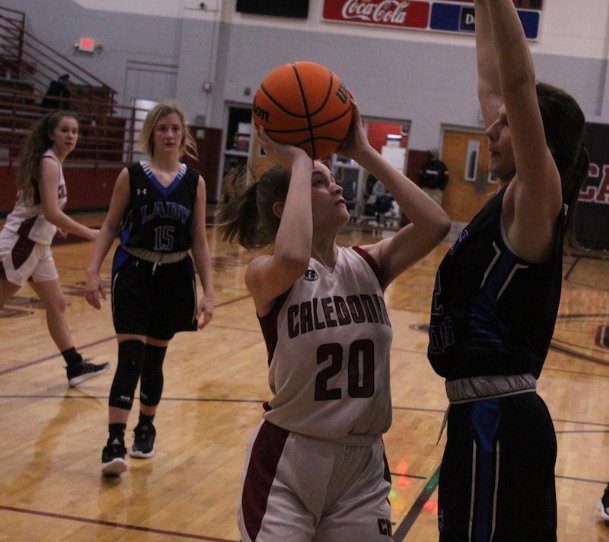 But rarely have the Cavaliers dominated the period like they did in Monday night's home game against Hamilton.

Caledonia (4-14) outscored the winless Lions 25-3 in the third quarter, started a run of 23 unanswered points that nearly lasted until the final buzzer and turned the tide from an up-and-down first half to earn a 59-22 home victory.

And all it took was a simple realization at halftime, junior Tenyzia Lathan said.

"That's all we had to do: We had to get our head back in the game," she said.

Caledonia led 16-4 after one quarter of play but let the Lions get within seven points at halftime, another sign of the early struggles that the Cavs have seen all season.

"The first half is just not our half," Walker said.

So Caledonia set out to make the second half its own. Right away, Libby McMurphey made a deep two-point jumper and Amaiya Quinn hit a layup. One Hamilton basket later, Lathan scored four straight points, and the Lions responded with a free throw.

Then the rout was on. Dominique Hodges scored for Caledonia, and Lathan contributed 10 consecutive points to follow the bucket. She finished with 25 points -- 16 in the third quarter alone -- as the Cavaliers turned a 23-16 game to a 48-19 rout in eight critical minutes.

"She has the ability to take over a game when she wants to, and it doesn't matter the opponent," Walker said of Lathan. "It's just getting her to that point."

On Monday, Lathan's ability to start off hot in the third quarter helped her build confidence to spark the Cavs' run. She poked away ill-advised pass after ill-advised pass from the Lions, breaking away down the court to lay in each turnover.

"If you start missing shots and stuff, you're going to get down," she said. "That kind of helped me out a little. That helped me help my teammates."

Lathan opened the fourth quarter with a basket and an assist to Quinn as Caledonia stretched its lead to 36 points. Finally, a 3-pointer by Hamilton's Gracie West with just 1:19 left in the game snapped a 23-0 run that lasted for a majority of the second half.

"It felt good, to be honest," Lathan said. "We need to do that every game, but it just felt good this game."

Caledonia doesn't have many games left this season, but Walker said she hopes her team will build on Monday's win -- and that Lathan will be on hand for plenty of similar performances down the road.

"Tonight, she stepped up, and I'm expecting her to do that more often in the future," Walker said.

The Caledonia boys still have yet to play more than two games in a row this season with the same starting lineup.

This season, coach Tony Seals said, has been "one of those frustrating years" with plenty of challenges. Only two Cavaliers have yet to miss a game because of COVID-19 infection or quarantine, and just last Friday, big man Alex Mathews tore his Achilles tendon in a game at Mooreville said.

But while Caledonia (5-11) has had to turn to inexperienced players, there's a bit of a silver lining

"It's forced us to play young guys more," Seals said, "and because of that, they've gotten better quick."

Monday's 68-33 victory over Hamilton was a good example of the Cavs' recent youth movement. Ten different Caledonia players scored, and freshman Issac Grady led the way with 17 points as the home team jumped out to a 13-0 lead en route to the big win.

"We need this win going into the end of the season," said Jarvis Leigh, a senior on a Caledonia team now without many. Leigh, who said he's been "running the show" of sorts since his sophomore season, added 11 points for the Cavs and was integral again with his passing and defensive ability.

Leigh said the Cavs' win Monday gave them good momentum going into Tuesday's Region 2-4A road game at South Pontotoc, which should go a long way in determining seeding for the district tournament. While Pontotoc, Itawamba Agricultural and Shannon are locked in as the No. 1 through No. 3 seeds, Caledonia, South Pontotoc and Mooreville are still fighting for the No. 4 through No. 6 spots. Since the top four finishers in the district tournament make the MHSAA Class 4A playoffs, Caledonia hopes to avoid a likely 3-6 matchup with Shannon in the first round and play in the 4-5 game instead.

But Seals said his team has improved a lot from the first part of its frustrating season. The teams that beat Caledonia soundly early on are finding a lot more fight in the Cavs the second time around.

"We've gotten better defensively than what we were at the end of the year," Seals said.

Caledonia showed that Monday by holding Hamilton to just five points in the first quarter and 13 in the first half. Like the girls before them, the Cavs forced plenty of turnovers and ran them out for fast-break buckets to stretch their lead in quick spurts.

The lead dwindled a bit during the fourth quarter as Caledonia's substitutes saw extended time on the floor, but even that, Leigh said, will be beneficial in the long run.

"It's going to help very much in the playoffs -- everybody having experience and being ready to play," Leigh said.

And though it's been a tough season for Leigh and his team, he said just being able to be on the floor Monday was a pleasure.

Heritage Academy will play Tuesday at Lamar School in Meridian.

Willie Young had 17 points for the Falcons, and Tre Dismuke had 10.