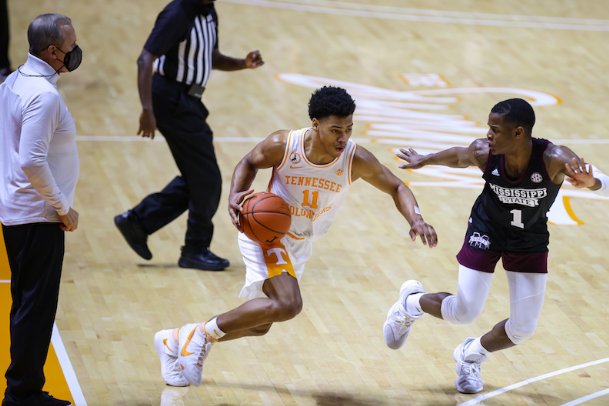 For fans of offense, Tuesday's matchup between No. 18 Tennessee and Mississippi State was far from ideal. The lid on the basket refused to open, turnovers seemed more frequent than converted baskets and double-figure scorers were hard to come by.

None of that prevented Mississippi State going toe-to-toe with a ranked opponent on the road for the second game in a row. But between 18 turnovers, seven missed free throws, and a shooting percentage less than 33 percent, the Bulldogs failed to convert another winnable game into a victory, losing to Tennessee in a 56-53 decision.

"Eighteen turnovers makes it hard to win anywhere on the road, much less a really good Tennessee team," MSU coach Ben Howland said. "We gotta shoot foul shots better to win and we need to make some shots, we missed a number of shots at the rim and we have to finish better."

"I thought our team defense the last two games was the best team defense we've played all year," Howland said. "We're playing two of the three top teams in our league. We had chances in both games to win on the row, we just have to do a few things a little better to complete the task."

Both players and coaches alike will wonder what might have been when they review the film later in the week, especially with several plays going against MSU down the stretch.

Trailing 50-48 with 2:32 remaining and the shot clock winding down, Tennessee five-star freshman phenom Jaden Springer fired a desperation shot that was completely off kilter. Looking at replay reviews, Springer failed to release the ball before the shot clock hit zero, but no whistle was blown. MSU players, thinking they just forced a shot clock violation, began walking toward the other side of the court, but play continued as Tennessee's Keon Johnson scooped up an offensive putback despite the Bulldogs having a 3-on-1 advantage in the post, extending the Volunteers' (11-3, 5-3) lead to 52-48.

"I believe I was in help side and one of my teammates, we stopped playing because the shot clock went off and we thought it was our ball after," MSU point guard Iverson Molinar said. "We didn't continue to play and that's how they scored. Everybody makes mistakes and at the end of the day we needed to make a couple more plays to have a chance to win."

Howland pleaded with the officials for a replay review, but per NCAA rules, all reviews must come within the final two minutes of regulation.

"It wasn't within the last two minutes of the game. And (the shot) wasn't out of his hands," Howland said. "That was a huge play. That's a big miss."

It didn't help Howland's mood that his team was on the receiving end of an overturned goaltend call taking away a Molinar layup trailing by five with about 43 seconds remaining. On that possession, all's well that ended well, because Cameron Matthews made a layup one second later to cut the deficit to three, but it didn't suppress Howland's frustration.

When asked in his postgame presser if he thinks the rule should be changed to expand replay review outside of two minutes, the sixth-year MSU coach was noncommittal to an answer.

"I don't know. I'm not on the rules committee, they're worried about finishing games within two hours for television reasons," Howland said. "I think it's a hard question, because they were able to request a check of the goaltend in the last two minutes, and they won that. So, we can't get one, but that's just how the ball bounced for us. It's tough."

A few breaks that didn't go MSU's way aside, Howland didn't excuse his team's poor execution down the stretch, despite holding Tennessee to 3-of-19 beyond the arc and 37 percent shooting from the field.

"We've had a number of games where we struggled down the stretch making the right reads and plays," Howland said. "But we're going to get better. They're going to keep working at it and I have confidence in them."

Molinar had a game-high 16 points for MSU, while D.J. Stewart was the only other player in double figures with 11. Yves Pons was the only Vol in double digits with a 13-point effort.

MSU is back in action against Iowa State at 5 p.m. Saturday at Humphrey Coliseum as part of the Big 12/SEC Challenge.

"The fact that we have such high character kids and phenomenal leadership amongst the team amongst the players, starting with D.J. and Abdul (Ado), I think we'll bounce back and have a great effort with our practice on Thursday," Howland said. "This is the first time for many of our guys playing in the SEC, you can see it's a very difficult league night in and night out. The last two nights we've brought a great effort and if we continue to do that we'll be rewarded for it moving forward."