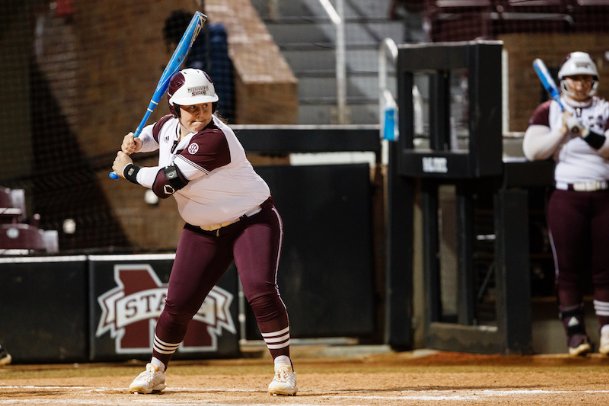 Mississippi State senior Mia Davidson emerged from a brief slump with a two-run home run to center field in the first inning Monday against Mississippi Valley State. The Bulldogs beat Missouri State 5-0 before run-ruling the Devilettes 10-1 in Starkville. Photo by: Laura Parsley/MSU Athletics

Before Wesley even joined the Bulldogs, she came in as a four-time Mississippi Gatorade High School Player of the Year at Neshoba Central. In her time with the Rockets, she won an astounding five MHSAA Class 5A championships.

So when Wesley made her first appearance of the 2021 season Monday for Mississippi State, it only stood to reason that she'd continue her winning ways. Wesley pitched five shutout innings, striking out eight, as the No. 22 Bulldogs (5-1) beat Missouri State 5-0 on Monday afternoon as part of The Snowman (Alex Wilcox Memorial) Tournament at Nusz Park.

"For her to just go out there and be Aspen, that's what she's done her entire life," Ricketts said.

Wesley used her top-notch spin and movement and her tricky change-up to baffle the Bears (3-1) all afternoon. She didn't allow a hit until Missouri State's Madison Hunsaker led off the fourth inning with a double, and she left five Bears stranded in the fourth and fifth innings combined.

Wesley said she came in nervous for her first appearance, but the butterflies soon faded away.

"I just told myself that I've been working up to this point and so I just have to believe in myself," she said. "I knew that my teammates had my back, so I felt much better."

The Bulldogs' offense backed her with a solid showing, scoring three runs in the third inning and adding two in the fifth. Juniors Anna Kate Segars and Chloe Malau'ulu, senior Carter Spexarth and redshirt senior Montana Davidson all had two hits in the contest.

Davidson, who delivered a fifth-inning run with a bloop single, said the team renewed its focus after Sunday night's 6-5 extra-inning loss to Southern Illinois.

"I think it was just more just staying within our plans and being ready to hit the pitch that we are looking for, and I think we did a better job executing that today than we did in the last game," she said.

Mississippi State also cleaned up its defense, remaining error free in both its win over the Bears and a subsequent victory over Mississippi Valley State. After seven errors between Sunday's games against Stephen F. Austin and SIU, it was a welcome change.

While the Bulldogs shuffled their outfield Monday, moving Segars to center field from left, Ricketts said the team's defense took a step up all around the diamond.

"We just talked about playing catch and taking care of the softball at both ends," Ricketts said.

Combined with a performance from Wesley that was right in line with her recent practice showings, it was enough for a victory for Mississippi State.

"She didn't try to do too much," Ricketts said. "She just pitched her game and what we've been seeing from her the last few weeks, so it was nice to get her out there and just let her get some confidence going forward for us."

Another thing Ricketts and the Bulldogs stressed after Sunday night's loss was getting more energy from the Mississippi State dugout throughout each contest, not just late in games when the Bulldogs' bats finally get going.

That wasn't the case Monday.

"I thought the dugout was awesome," Ricketts said after Mississippi State closed out the tournament with a 10-1 run-rule win over Mississippi Valley State (0-3). "They were locked in; they were focused; they were loud and having fun, which is when we play our best."

The enthusiasm from the third-base dugout helped the Bulldogs put up all 10 of their runs in the first three innings to beat the Devilettes: two in the first, two in the second and a six spot in the third.

And for some of the same Mississippi State players leading the charge from the bench, it led to a chance to see the field for the first time this season -- or, in freshman Addison Purvis' case, in her college career.

Purvis, who flied out to deep center as a pinch-hitter in the fourth inning against Valley, was one of four Bulldogs who made their season debuts Monday. Wesley started against Missouri State, Kiki Edwards pinch-hit for Christian Quinn against the Bears, and Celeste Soliz spelled Jackie McKenna at catcher against the Devilettes. Edwards grounded out to third in her lone plate appearance, while Soliz drew a walk in her own turn.

"They've all been wanting it," senior Mia Davidson said. "They've all been cheering, doing their role. It showed they all had confidence and were ready to go, and it's just a great thing seeing them at the plate."

Davidson scored Malau'ulu with a two-run home run to center field in the first inning against Valley, breaking a bit of a slump for one of the most talented players in the Southeastern Conference. Her batting average sat at .125 after an 0-for-3 outing against the Bears but rebounded to .211 after a 2-for-3 game against the Devilettes.

"It was very relieving to do it," Davidson said of her first-inning blast. "I think I've been putting too much pressure on myself, so I just told myself to relax and see the ball. Finally it happened, which is good. The team had my back the whole time, so I wasn't really too worried."

Sophomore Brylie St. Clair went 2 for 3 with a two-run single against Valley, another strong performance out of the lower part of the Bulldogs' order. Montana Davidson, who typically hits seventh, is the team's leading hitter with 8 hits in 17 at-bats so far, and St. Clair provides Mississippi State with a second leadoff hitter of sorts, Ricketts said.

"To have production out of (Nos.) 7, 8 and 9 down there is huge," Ricketts said. "The faster we get back to the big bats at the top is always going to be clutch for us, and they had a lot of good RBIs as well in both games."

Mississippi State received two surprise visitors to Nusz Park on Monday: the grandparents of Wilcox, who died of ovarian cancer in June 2018 after spending her freshman season with the Bulldogs and for whom the Snowman tournament was renamed in 2019. Her grandparents drove up from Alabama to Starkville to take in both games.

"To see her family and their big hearts and how they still love us and this program and the girls and want to be here and support us was really special for us as well today," Ricketts said.

The coach said the team's hearts are always with Wilcox and that her memory reassures them no matter what they're going through on the field, it's only a game.

"I think it's just a good reminder for the girls that, 'Hey, yeah, we lost a game last night, but it's just softball,'" Ricketts said. "We know this is a game, we're having fun, we love it, and we're playing for those who can't anymore who we're representing, like Alex."