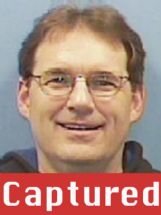 A tip from a Mississippi resident led authorities to one of the FBI's most wanted criminals Saturday in Virginia.

James T. Hammes, 53, had been wanted by federal authorities since 2009, when he allegedly embezzled more than $8.7 million from a Kentucky bottling company. After being indicted, he vanished. Throughout the last six years, Hammes' case has been featured on TV shows like "America's Most Wanted" and "American Greed."

The "American Greed" episode, in fact, aired several months ago. When it did, a northeast Mississippi resident who hiked the Appalachian Trail in 2014 was watching.

The resident -- who granted The Dispatch an interview but wishes to remain anonymous until the criminal case concludes -- recognized Hammes as someone he or she hiked the Trail with last year. The hiker emailed the FBI.

The man on the "American Greed" episode was a frequent Appalachian Trail traveler. They had spent time together last year along the trail. Everyone called him "Bismarck" and he traveled with a blonde woman he introduced as his wife.

The information eventually checked out.

"Nicest guy ever," the hiker told The Dispatch on Tuesday.

The hiker met the man known as "Bismarck" not long after taking off on the Appalachian Trail for the first time on March 1, 2014.

Over the next several months, the hiker bumped into "Bismarck" here and there: at a shelter during lunchtime, at a hotel they were both staying in, at a resting spot along the trail, which is a historic 2,200-mile footpath that stretches from Georgia to Maine.

"Bismarck," the hiker said, had a big beard and wore glasses. He wore a cross around his neck and prayed before meals. The hiker took several photographs with "Bismarck" during the six-month trek to Maine. In each of them, "Bismarck" is smiling. The hiker passed the photographs along to the FBI.

The hiker also let the FBI know "Bismarck" had mentioned attending Appalachian Trail Days Festival in Damascus, Virginia, a small town along the trail, in years past. The 2015 festival took place this past weekend. The northeast Mississippi resident was attending and notified the FBI that the word was that "Bismarck" was in town.

On Saturday morning, federal agents arrested Hammes at Montgomery Homestead Inn in Damascus. The bed-and-breakfast owner said Hammes, who she knew as "Bismarck," had been staying there off and on since 2010.

"He was one of my favorite hiking people," she said.

The FBI has not said publicly how it found Hammes in Damascus.

Hammes remains in custody in Virginia and will be returned to Ohio to face 75 charges, including 38 counts of wire fraud and 37 counts of money laundering.

As for the Mississippi resident who played a part in leading authorities to him: Did the truth behind the acquaintance known as "Bismarck" spoil the pleasures of hiking?

"Oh heck no," the local hiker said. "There's probably worse people than him out there, but they are few and far between. As a whole, the hiker community is safe."

Information from a Lexington (Kentucky) Herald-Leader story published Tuesday was included in this article.