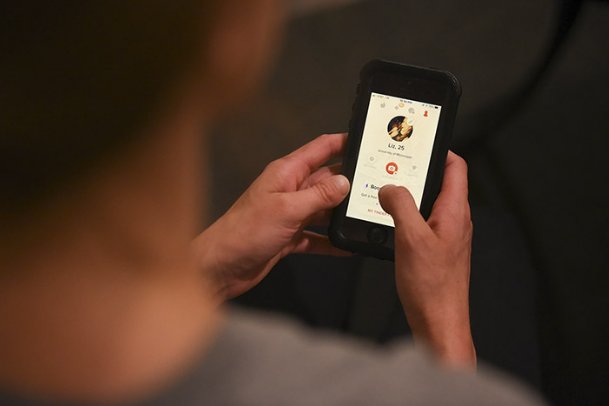 Liz Petro looks at her Tinder profile for a photo illustration on Monday in Starkville. Use of dating apps and websites has vastly increased, nationwide and in the Golden Triangle, since COVID-19 brought quarantines and social distancing guidelines. Photo by: Claire Hassler/Dispatch Staff

In 1977, musician John Paul Young first released the hit song "Love Is in the Air."

If a musician tried to write lyrics to detail the virtual dating scene in the Golden Triangle amidst the COVID-19 coronavirus pandemic, they probably would have a different message.

It's not likely a song titled "Boredom, Loneliness and Minor Shreds of Optimism Are in the Air" would land on any Top 100 lists, but it would be the closest thing to resembling the truth if several Golden Triangle residents using dating websites and apps are to be believed.

"If I get a match or something, it's like, 'Oh, cool' and there's that little release of dopamine in your brain," said Cody Bates, a 24-year-old graduate student at Mississippi State University. "Then you start talking with some of these people, and nine out of 10 (times), it's just a super dry conversation and I end up asking myself why I'm on this app again in the first place."

Bates said he is trying to stop using Bumble and Tinder, two popular dating apps. But he and other users agree that activity and matches on the apps increased in March and April when the pandemic started restricting activity both locally and nationally. Gov. Tate Reeves implemented a "shelter in place" order in early April that lasted most of the month.

Since then, activity on dating sites has increased, both locally and nationally. According to a spokesperson from eHarmony, a dating site that requires a subscription, messaging between users has increased 338 percent in West Point, Columbus and Starkville since the beginning of social distancing in March. In the Golden Triangle, the most active age groups are Millennials (25-40) and Generation X users (41-55).

To further enhance its site, eHarmony added a "Videodate" feature on April 20, which resulted in a 28 percent increase in new user sign-ups from the month prior. Videodate is available only after two members have initiated a conversation and sent several messages back and forth. There are no time restrictions.

Data from OkCupid, a free dating website, shows a 4-percent increase in introduction messages sent by users in the state of Mississippi. An OkCupid spokesperson said women on the site have become more accustomed to making the first move, as females have sent 9 percent more intro messages during the pandemic than they were at this time in 2019.

Tinder, Hinge and Plenty of Fish, all of which are free, declined to reveal data specific to Mississippi. However, a spokesperson for Tinder said daily conversations increased 19 percent around the U.S. and have lasted 8-percent longer since March.

Meanwhile, Plenty of Fish added a virtual dating feature called Plenty of Fish Live!, which enables Plenty of Fish app-users to livestream with friends and potential matches. In May, the site began hosting virtual social hours to help singles date from a distance every Thursday and Saturday night on Live!

"We are always working on new ways to best help our members find meaningful relationships," said Gareth Mandel, chief operating officer for eHarmony. "While we've had to adapt to this new normal, we will always continue to connect compatible people looking for relationships. Love always finds a way."

The increase in virtual dating activity, at least in the Golden Triangle, didn't wane when state and local restrictions on businesses and movement lifted in late April and early May.

"They've got a lot more clients now, and they're going to keep those clients since they had to use it, and now they've discovered, 'This is kind of nice,'" Petro said.

The impacts of quarantine

Petro has used Bumble and Tinder for about five years, minus a year when she was in a relationship with someone she met on one of the apps. She started using the apps again and added Hinge to the mix last year after the relationship ended, she said.

"I'm very picky when it comes to pictures, but if I see a person and hear how they talk to me, I'm not as shallow," Petro said. "So I don't match with tons of people, but I noticed (recently) that there was a good bit, every single day, more and more, and they all had something to say about the quarantine, more than likely."

Kyle Callahan, on the other hand, said he hasn't gone on any dates recently and lost interest in Bumble after the first few weeks of quarantine.

"Where I work, I was pretty isolated already and I'm an introvert by nature, so (social distancing) didn't bother me as much," said Callahan, who is 24 and a graduate research assistant at MSU's Center for Advanced Vehicular Systems.

Callahan agreed with Bates that swiping through dating apps provides a dopamine rush but doesn't replace interactions with others. Bumble eventually became a way to alleviate boredom rather than to find a potential partner, Callahan said.

Bates said he has been on a few in-person dates recently, but not with anyone he met on the apps. The lack of interpersonal contact during the pandemic has gotten to him, he said.

"Now more so than ever, I want that human contact," he said. "Not even in a sexual way, but just hugs and snuggles and cuddles and stuff."