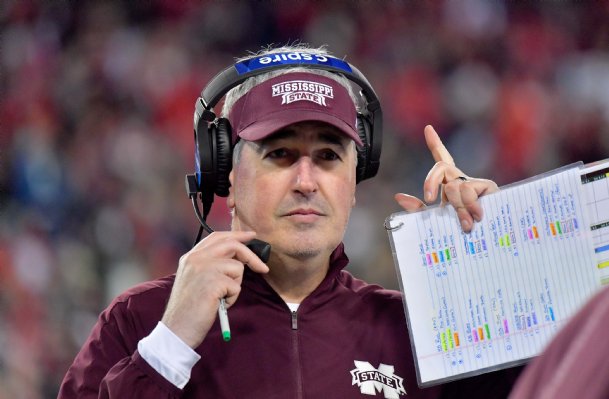 STARKVILLE -- Joe Moorhead thought it was his moment of triumph.

Sitting next to the Golden Egg trophy minutes after an emotional win over Ole Miss on Thanksgiving, the second-year Mississippi State coach boldly tried to reassert his hold on the football program.

He thought he was guaranteed another season.

"You'll have to drag my Yankee ass out of here," Moorhead said.

Or rather, as Moorhead so eloquently put it himself in his Egg Bowl press conference, Mississippi State's head football coach was told by the higher-ups to pound sand and kick rocks.

Yet considering the university said he'd be back in 2020 just a few days after the Egg Bowl, the timing of the firing seems bizarre.

Yes, the Bulldogs delivered what many considered to be a disastrous performance in a 38-28 loss in the Music City Bowl to Louisville. And MSU took another black eye (no pun intended) a few days before the Music City Bowl, when Willie Gay Jr. punched starting quarterback Garrett Shrader in the face, forcing him to miss the game. Gay Jr. was not disciplined, with Moorhead calling the incident "a team matter."

All that aside, Moorhead's demeanor in the postgame press conference didn't seem to resemble a man who was a few days away from getting fired. Heck, he told reporters he planned to run a team meeting Sunday.

It's entirely possible Moorhead was as shocked as the rest of us when he first learned of his potential termination.

Who knows if the fight followed by the loss was really the last straw, but if Power Five schools in Mississippi have taught us anything the last five weeks, it's that they REALLY don't like to be embarrassed.

Maybe MSU athletic director John Cohen and company decided the Egg Bowl win was just superficial corn flakes for a fanbase starved for any happy moment all season. Not an indicator of a team making progress.

On Friday, Cohen said a litany of factors led to the decision to fire Moorhead, including off-the-field issues. He repeated multiple times it wasn't one specific incident but a multitude of factors.

There's plenty of other reasons why the administration want new leadership.

- 10 players were suspended by the NCAA for eight games this season after committing academic misconduct, including several key defensive starters. Blaming what is now famously known around Starkville as "Tutorgate" squarely on Moorhead seems unfair, but the fact remains it happened under his watch. Reasonable or not, the head coach is going to get credit/blame for everything that goes on in his program, good or bad.

- Moorhead constantly brought up his three consecutive top-25 recruiting classes in the nation. And it's true, he has pulled off that feat. Yet, it's still curious how the Bulldogs are set to open the 2020 season without a proven receiver, a completely inexperienced backfield (assuming Kylin Hill still leaves for the NFL), an offensive and defensive line that are in need of serious help, a special teams unit that was the angst of many MSU fans, and a secondary that was leaky all too often.

- For a coach who was brought in to be an offensive guru, the offense sure sputtered a lot throughout his tenure. The Bulldogs' offense ranked 63rd and 71st nationally over Moorhead's two seasons at the helm.

- Moorhead was 0-5 in games where he had multiple weeks to prepare for his opponent. Two of those games are LSU and Alabama, so he gets a mulligan there, but the others are bowl games MSU was favored in, and a road game against a hapless (at the time) Tennessee team starting an inexperienced quarterback.

There's more, but you get the point.

It's not going to be a popular opinion, but there's also a case to be made he should get another season. It could be considered a distasteful look for a university to fire a coach it committed to nearly a month ago. It's even worse considering how long this decision dragged out. Of course, firing a coach after just two years and after two straight bowl appearances seems like a very bold move.

Nevertheless, most of the fanbase had seemingly turned on Moorhead a long time ago, and the decision to remove him has already been made.

Which means there's only a few things left to say.

Firstly, I feel bad for Joe the person. From his perspective, he has to feel lied to after getting reassurance he was going to be back for 2020. And regardless of the circumstances, it's never fun to see anyone lose their job, regardless of how much money they made. His family's life is completely impacted, which of course is the risk you take getting into the profession, but it doesn't make it any more fun for the wife and kids.

I'll preface this next sentence with a tidbit that reporters often don't know the coach they cover away from a professional setting. Moorhead is a little different in that regard. He was accessible for features about his players or program at a level I've never seen from a Power Five coach. From all interactions I've seen, his players liked playing for him. You can never be totally sure, of course, but I truly believe that Moorhead is a good and well-meaning man.

None of that guarantees you'll be a successful coach, though.

Moorhead also had his faults. I'd say something about what his play calling was at times, but MSU fans on Twitter have already done that for me. He was overly secretive about injuries to a point that just became eye roll-worthy (one could make a drinking game of every time Moorhead said upper- or lower-body injury). He lied to the press twice that we know of. Once when he said he wasn't going to scout Ole Miss the week they played Abilene Christian. He later fessed up and admitted he did. Honestly, that was relatively harmless in the long run.

Then there was a more serious fib, when he told the media in the preseason Gay was dealing with an injury. After that story was reported, Gay approached a group of media members confused why they reported he was hurt and admitted he had no such injury. When asked again about Gay, Moorhead refused to come clean and doubled down on the apparent injury. Gay was suspended for eight games in the 2019 season. Little things like transparency matter, especially when you're trying to run a program with accountability.

Secondly, and probably more importantly, Cohen better get this next hire right. He's in his third year as athletic director and is already getting to hire his second football coach. It's not likely he's going to get a third.

Let the Billy Napier to MSU rumors commence, and there's no doubt he's an intriguing candidate. But he owes it to the fans -- and really, himself -- to explore his options to find the right fit for the program.

Mississippi State football is entering a critical time in its history. How the next few days, or even weeks, play out will be critical to the seasons to come.

4. Recruiting could be a 'sad situation' for many if high school football is canceled this fall HIGH SCHOOL SPORTS