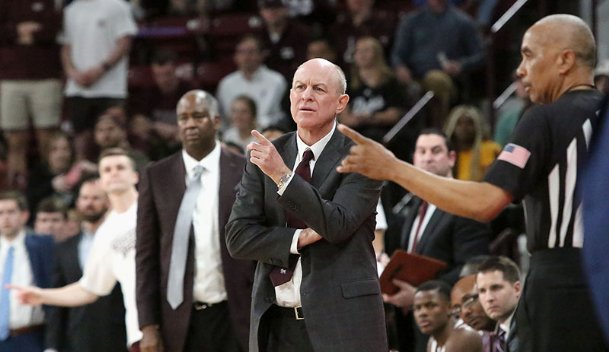 Associated Press Co-SEC Player of the Year Reggie Perry declared for the NBA draft, leaving a gaping hole in the Bulldogs' frontcourt.

"Reggie had a great season and two years with us," MSU coach Ben Howland told reporters in a Monday conference call. "Obviously, he was an outstanding player ... He got about every honor he could get and ultimately, he is going to be an NBA player and I have no doubt about it. He has the skill package to go with his great understanding of the game."

Now, all eyes turn to sophomore forward Robert Woodard II, as the Columbus native has yet to decide if he'll enter the NBA Draft or return to school for his junior year. Woodard II averaged 11.4 points and 6.5 rebounds per game last season while shooting 49.5 percent from the field and 44.7 percent beyond the arc.

Woodard II has begun seeking evaluation from the under-graduate advisory committee, where NBA teams will weigh in if they see the athletic forward as a lottery pick, middle or late first-round pick, second-round pick or as an undrafted player. Most NBA Mock Drafts have the 6-foot-7 forward going in the second round.

"The thing I try to stress with Robert and his family is the importance of doing everything you can to be a first-round pick," Howland said. "When you look at the data over the last 20 years, the whole key to being an NBA player is longevity, being in the league for 10-plus years. That's how you make it a career, that's how you make it a livelihood. When you look at the numbers, first-rounders last so much longer and get paid so much more than a second-rounder. So there is a lot to consider and again, it is early on."

Woodard II's decision gets even more complicated considering the impact of the COVID-19 coronavirus. After his freshman season, Perry attended the NBA scouting combine and got extra feedback from professional scouts, and was able to work out for certain teams. Having the additional information led to the 6-foot-10 forward staying another year. Woodard II may not have that option because as of now, it appears unlikely the NBA will even have a combine before the draft.

"There is so much up in the air right now," Howland said.

Assuming Woodard II stays, Perry's departure, along with five players that saw minimal playing time at most enter the transfer portal, opens three scholarships for the 2020-2021 season after factoring incoming freshmen Deivon Smith and Cameron Matthews. Howland hopes to fill those spots both via the grand transfer market and by recruiting high school seniors.

"What we are doing recruiting wise now is over the phone," Howland said. There's a lot of kids in the transfer portal."

The fifth-year MSU coach added recruiting has been unprecedented this offseason because the coaches can't leave campus for recruiting visits, nor can recruits take official visits to Mississippi State. Howland estimates that will likely be the reality until at least May, so phone conversations will have to suffice for now.

Monday, the NCAA ruled to allow all spring athletes an extra year of eligibility, though all winter athletes were denied any additional seasons. Considering the majority of their season was played, though, Howland said he thinks most basketball seniors will accept the decision.

"Like for (MSU guard) Tyson Carter, he had a great experience this year and was the (SEC's) Sixth Man of the Year," Howland said. "I think Tyson is ready to move on and start a professional career. I think he will have a long professional career and be able to play overseas and make decent money for a long time."